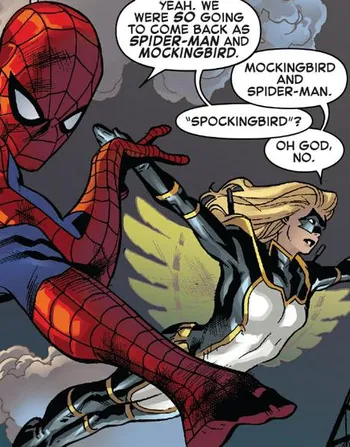 "Mockingman" was also promptly rejected.
"Can someone tell me why 'I think Annie and Mort would make a nice couple' isn't as good as 'Anmorttimomerny'?"
— Tom Siddell, author of Gunnerkrigg Court
Advertisement:

When Shipping a pair of characters, fans often combine the characters' names into a portmanteau word. They then use this word to refer to the couple as a unit. CamelCase is optional.

Although common in Anime fandoms, where the syllable-based nature of the Japanese language means names are modular and can be snapped together with ease, there are still numerous examples of Real Life celebrity couples where this happens.note It should be noted that with Japanese characters, the English names for these pairings often don't work as the syllables of the name separated differently in each language. For example, with Digimon, the pairing of Taichi (Tai for short in the dub) and Sora is often called "Taiora" in English, but in Japanese, the name "Taichi" is spelled with one character for "ta" and one for "ichi" while "Sora" is all one character. As such, the pairing name becomes "Tasora." Some purists will get mad at you for "splitting the kanji" and using pairing names that can't be written with the letters in the characters' names in Japan, though of course most people consider that to be really overthinking things.

Slash Fic pairings can also adopt this naming convention. When such pairings are involved, the order of the names also becomes significant, as the name appearing in the first half of the portmanteau is usually the dominant member.

For less obvious variations, see Idiosyncratic Ship Naming. Portmanteau Couple Names may also come in handy if the couple performs a Fusion Dance and literally becomes a single being.