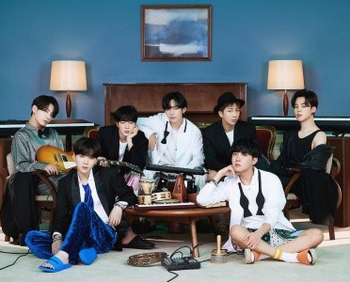 BTS (or Bangtan Boys, or Beyond the Scene, or Bulletproof Boyscouts, or Bangtan Sonyeondan) is a Korean Pop/Hip-Hop/R&B Boy Band that debuted with BigHit Entertainmentnote now BIGHIT MUSIC under HYBE Labels on June 13, 2013, composed of seven members: rappers RM (leader), SUGA, and j-hope, and vocalists Jin, Jimin, V, and Jungkook.

Interestingly, their fame grew very gradually; while they had a strong start for a small company idol group, they only started to reach higher success in Korea in 2015 (gaining an international fanbase much earlier) with singles "I NEED U" and "Dope", and winning their first big Korean awardsnote awards in main categories such as Artist or Album of the Year, also known as daesangs in 2016. In 2017, they ended Justin Bieber's 6-year winning streak with the Billboard award for Top Social Artist, marking a turning point in their career. They've broken many records before and since, having the highest-selling album in Korean history. They've also performed in sold-out tours in Asia, the Americas, Europe and other places, becoming (among other things) the first Korean group and Asian act in general to perform in Saturday Night Live, and the first to headline a concert at Wembley (with 2 sold-out nights). By the end of the 2010s, they were by the biggest boy band on the planet, achieving a level of stardom rivaled that decade only by One Direction.

An unusual aspect of BTS is that the members have had significant input in their work since the beginning (including pre-debut), with all members having participated in songwriting; notably, RM and Suga were involved in the underground hip-hop scene in Korea as teens. While the main influence of the group has always been Western Hip-Hop, they're very versatile, often giving their own spin to wherever their Genre Roulette lands on and have a tendency to do Genre Mashups.

BTS' work has recurring themes centered around youth and young people's place in society, often dealing with topics such as mental health, expectations pushed onto young people, and social inequality, with more than one Protest Song under their belt; they also incorporate their own personal experiences into their work, including their career and difficult rise to stardom. Additionally, all three rappers (RM, Suga and J-Hope) have released very personal and distinct solo mixtapes - RM (2015), Agust D (2016), Hope World (2018) and D-2 (2020), all heavily referencing the different points of their careers at which they each were released. In 2018, RM also released the introspective mono. (which RM has called not a mixtape, but a "playlist").

Their biggest and most ambitious project, however, might be the creation of an entire Mind Screw of a multi-media storyline tied to the narrative in their music, starring fictional versions of the members in what BigHit has named the BTS Universe. This series is comprised of Concept Videos, teasers, short films, a webcomic (titled SAVE ME), novels (The Notes) and other content, starting in 2015 with the "I NEED U (Original Ver.)" music video and currently ongoing. To read more about the storyline and characters of the series, you can go to the BTS Universe work page.

They've also entered the big screen. Months after the Youtube Premium series of the same name, the movie Burn the Stage - a documentary about the WINGS Tour in 2017 and the experiences behind the scenes of the members throughout - was released worldwide on November 15th, 2018. In January 26th, 2019, the Concert Film LOVE YOURSELF Tour in Seoul was released in cinemas around the globe as a one-day-only event. In August 2019, they released another documentary film about the LOVE YOURSELF tour under the title Bring The Soul; another documentary series of the same title was released weeks later on BigHit's Weverse app. A third series, Break The Silence, is also available in the Weverse app, with its release being followed with a third documentary movie, Break The Silence: Persona.

The album MAP OF THE SOUL: 7, was released in February 21st, 2020. It had 2 singles: the lead single "Black Swan" (released in one version

), and the main single "ON". The latter has 2 music videos, the "Kinectic Manifesto Film"

(a Performance Video) and a cinematic

Concept Video featuring the members in an After the End setting.

This album was notable for its promotion campaign, with a huge timeline of events

leading up to it. This included not one, but two comeback trailers, as well as the launch of CONNECT, BTS

, "a global project to connect five cities and twenty-two artists", that "may be described in terms of a collective curatorial practice by curators around the world who resonated with BTS' philosophy". The many plans they had post-release, including another stadium world tour, were halted however by the COVID-19 Pandemic. The members decided to use their time (that would have been otherwise spent in the now cancelled tour) in crafting their next album, livestreaming parts of the process on the BANGTANTV Youtube channel

In the meantime, the single "Dynamite", a disco-pop track entirely in English (the latter being a first for the group) was released in August 21, 2020 along with a music video

. According to the members, it's an unexpected project they took on to heal and bring joy for fans and other listeners during the pandemic. With "Dynamite", they became the first all-Korean act to reach #1 in Billboard Hot100 and the first Asian act (and third group in general) to debut in that placement; it had the highest global debut streams in Spotify in 2020, and broke the Youtube record of most views in 24 hrs. with a whopping 101 million views. This was followed by their second #1 hit, their remix of Jawsh 685 and Jason Derulo's "Savage Love", which became the first #1 hit with Korean lyrics. "Dynamite" would later give them their first Grammy nomination in a musical categorynote LOVE YOURSELF: Tear was nominated for Best Recording Package, that being Best Pop Duo/Group Performance.

The album BE (which also contains "Dynamite") was finally released in November 20th, 2020. It's the album with the biggest amount of participation from all the members in its production - down to V directing its visuals, for example - and it reflects their feelings on life during the pandemic. Its main single, "Life Goes On", has a music video directed by Jungkook

, and became the first track mostly in Korean to top the Billboard Hot100 chart in history, and the first non-English track to top the chart since Luis Fonsi and Daddy Yankee's "Despacito".

Another English single titled "Butter" was released in May 21, 2021, becoming their fourth no. 1 single in the US and breaking records in streaming platforms like Youtube and Spotify, followed by "Permission to Dance" weeks later. BTS thus became the first group in history to replace a #1 debut single with another #1 debut single on the Hot 100 chart. A remix of "Butter" featuring Megan Thee Stallion was released on August 27. On September 24, they collaborated with Coldplay in the song "My Universe"

for the latter's album Music of the Spheres—becoming yet another #1 debut for the group, as well as Coldplay's first-ever #1 debut.

At the end of their Permission to Dance tour in Las Vegas, they announced the coming of an anthology album named PROOF which was released on June 10, 2022. It is confirmed to feature 3 new original songs and a compilation of their greatest hits, plus new demo and special editions of songs never released before. Tracklists can be found here,

On June 14th, 2022, one day after their ninth anniversary, the band announced in a YouTube livestream that they'd be taking a break from group projects so the members could focus more on releasing solo albums.

No relation to the indie rock band Built To Spill. Or with the BFS trope (as cool as that combination sounds).

Note: All members participate in various degrees in producing, composing and/or songwriting.

Discography (in Chronological Order)
Other Media

Band and Member Tropes
Music Tropes
Music Video Tropes (not including those confirmed to be in the BU)
NOTE: For tropes regarding specifically the storyline and characters that connect various videos from the The Most Beautiful Moment in Life, WINGS and LOVE YOURSELF series, go to the BTS Universe work page.

Tropes associated with the webcomics (for SAVE ME, go here)