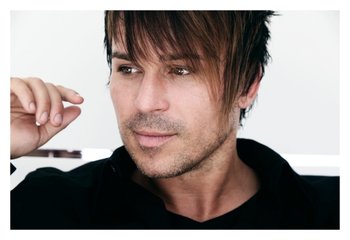 "My motivation is simple.
To be additive. I wish in some small way to bend the collective human narrative towards the positive.
To inspire untold (even to me) small leaps of faith that germinate and grow in people I will never know.
To make music that makes people feel connected & less alone. That inspires people to face life and even if they fail to do so with dignity."
—BT
Advertisement:

BT is the stage name of Brian Wayne Transeau (born October 4, 1971), a prominent electronic musician. His signature style includes a lot of post-processing effects, oftentimes making you think that your MP3 player has crashed horribly or become possessed by something quite unpleasant. Despite this, his music is still precisely rhythmical, insanely catchy, and omnipresent.

His albums have run the gamut from straight progressive trance, to vocal-heavy dance, to phenomenally stirring ambient music. As a producer, he's collaborated with many other artists (Mike Doughty, Tori Amos, Britney Spears, and Stewart Copeland to name a few) and remixed songs by... pretty much anyone he hasn't collaborated with (Madonna, The Doors, Diana Ross).

His 2010 album These Hopeful Machines was nominated for a Grammy Award in the "Best Dance/Electronica" category, losing to La Roux's self-titled album.

"The only constant is tropes":