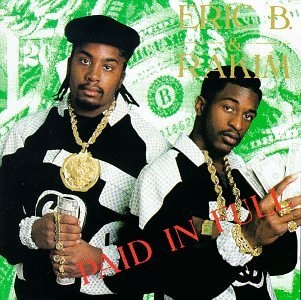 The classic debut. L-R: Eric, Rak.
RAKIM: "Cos I don't like to dream about gettin paid
So I dig into the books of the rhymes that I made
To now test to see if I got pull
Hit the studio, cos I'm paid in full"
—Eric B. and Rakim, "Paid in Full"
Advertisement:

Eric B. & Rakim, born, respectively, Eric Barrier and William Griffin, were a Rap duo from Long Island, NY who worked together from 1987 to 1992, and reunited again in 2016. They are best known for their songs "Paid in Full," "Microphone Fiend" and "I Ain't No Joke."

has a good writeup about their career.

The following tropes are paid in full: