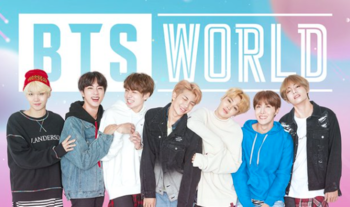 You, the Player Character, are a fan on the way to a BTS concert when you are suddenly thrown back into the year 2012 - now a manager from BigHit in charge of auditioning and managing the company's next artist: BTS. Will you be able to find, audition and guide the 7 members to ensure that they debut as the BTS you know and love?

The game is a mix of Visual Novel and RPG elements. The main story, also known as the "BTS Story", is a fictionalized biography of sorts of the Korean group. It's divided in Chapters, each with 20 levels. Levels can be one of 2 types: story levels, told through either a Visual Novel style or videos/cutscenes, featuring the actual BTS members acting as themselves; and mission levels, which you have to clear to progress.

The main mechanic is collecting member cards, which feature one member and have a set of 4 stats: Empathy, Passion, Stamina, and Wisdom (with one being the "main" stat), and can be leveled up (using Flowers), and upgraded (using Jewels). You need to collect and level up your cards to clear mission levels (which have different stat requirements, each prioritizing some of the stats) and progress in the story, where you'll have to work with BTS and overcome the various challenges on the way to help them debut successfully as a small company idol group and keep their career beyond that.

Along with the BTS Story, there's also Another Story, seven side-stories featuring one member, set in an Alternate Universe where the members don't know each other and pursue wildly different individual paths, with the Player Character helping them in their goals. These range from saving a member's rice cake family business, to collaborating in the search of a lost child, to helping a member overcome his stage fright for a piano competition. They work much like the main story, with 6 Chapters of story levels and mission levels. The "Second Season" of Another Story shakes the story and the mechanics a bit: the plot, now divided in 7 chapters of around 20 levels each, involve the Another Story version of the members finding the Magic Shop, a strange store that concedes wishes for the price of a memory, with the members interacting among themselves without the presence of the Player Character; the mechanics of the levels involve using your cards to achieve a certain punctuation, the closer to it the better, but you cannot get too below or too above the assigned score or you lose. The Magic Shop update also add an extra currency, Keys, who serves to buy additional items whom serve to upgrade certain cards beyond their original limits.

There are other elements: one is the Member Affinity mechanic, where interacting with members in "calls" and social media correctly (as a manager) gives you points, which helps with Another Story; the Agency, where you can make members do tasks that give bonus stat points for mission levels, but you also have to ensure the members remain in an optimal status through recovery items (obtained from beating the Main Story missions and in rewards).

Note: this page will use the name spellings from the official game.