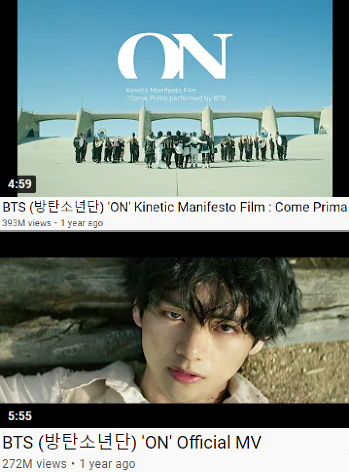 Your typical Performance Video...
then a whole cinematic After the End-style music video.
Advertisement:

Sometimes, on YouTube, you want to watch and listen to music videos of your favorite musicians or just want to discover new music. But what's this? You see another music video of the same song, and it's different from the one you watched with millions of views.

Sometimes you search the song on Wikipedia, you find out it had another music video. The chances of finding it can vary, with the video on the offical channel at best, at low-quality resolution at an unofficial channel at second best, or in a rare edition of a long-discontinued physical format at not the most optimal.

There are a plethora of reasons on why there's another music video. Factors can include international marketing, censorship (perhaps corollary with the international marketing if some scenes might be too violent or too sexy for the aimed region), time limitations if shown in broadcasts, exclusivity on bonus packs and collector's editions, for choreography purposes, promotion for a movie (provided people remember OR know it came from that movie) or the first attempt was just horrible.

Several K-Pop artists do this where they upload two music videos: one is the official music video where some acting and a storyline are usually involved along with the main parts of the choreography, while the other is only for the full choreography.

Lyric Video can be in relation to this. Compare Fanvid and Stupid Statement Dance Mix, where fans compile alternate music videos using other content, sometimes in sync with the music.