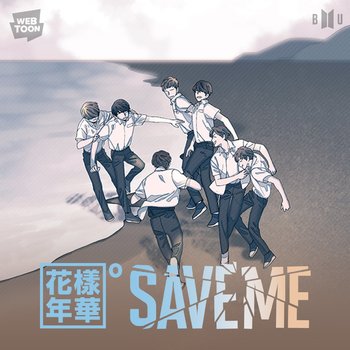 If you could turn back time... do you believe you can straighten out the errors and mistakes... and save everyone?
Advertisement:

The Most Beautiful Moment in Life Pt. 0: SAVE ME (or just SAVE ME) is an official Korean webtoon or manhwa created by BigHit Entertainment and LICO (creator of Refund Highschool) that works as a linear retelling of the BTS Universe, the story from the music videos, short films and Notes of Korean group BTS.

SAVE ME is the story of seven boys, the BTS members' Author Avatars from the BU universe. In a school ripe with Sadist Teachers, and with each having to deal with their own share of Abusive Parents and traumas while surrounded by useless adults and poverty, the boys' times together were their only moments of happiness.

The story, however, starts with Seokjin waking up on April 11 after returning to Korea from the US - 2 years after the group's separation. A month later he finds, to his horror and regret, that his six friends' lives have taken tragic turns note much like in the "I NEED U (Original ver.)" music video.

Then Seokjin wakes up in his room, on April 11. And then he wakes up again. And again. Will he be able to save his friends from their fates, or is it too late?

and published weekly for free in LINE Webtoons, starting in January 16th and ending in April 11th of the same year, which also happens to be one day before the release of BTS' album MAP OF THE SOUL: PERSONA. You can read it in its official English translation here

During the run of SAVE ME, BigHit also released The Most Beautiful Moment In Life: The Notes, a novel showing the backstory of the characters and the story after the events of this webcomic in the form of diary-like entries for each character. While the novel is optional to understand SAVE ME, both works are complimentary to each other and required reading to follow the plot of the BTS Universe.

Has no relation to the film of the same name.

WARNING: Like the BU, SAVE ME deals with heavy themes, including suicide and abuse. It also manages to be more graphic than its parent series. Proceed with caution.

SAVE ME provides examples of: