Harpo Does Something Funny 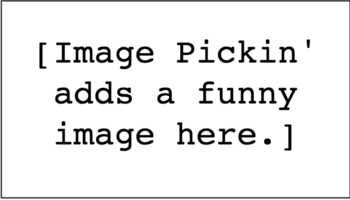 (Troper adds witty caption here.)
"You can always tell a lazy Robin Williams movie by the unavoidable scene in which he does a lot of different voices and characters."
— Roger Ebert reviews Father's Day (1997)
Advertisement:

The script doesn't show the actor's lines, but instead tells the actor to just improvise.

The trope is named after the Marx Brothers, whose scripts allegedly would frequently leave a note to this effect for Harpo to improvise something. The more formal term "retroscripting" is used to describe a script made up almost entirely of directions like these to allow a mostly improv performance.

The reason to do this is that some actors are just naturally funnier than anything a scriptwriter can come up with. As such, this is possibly the highest compliment that can ever be paid to a comedian. The only problem is that even if the comedian is hilarious, if such notes are not used well enough, the resulting scene can be jarring or out of place. Sometimes the actor produces huge amounts of improvised material, which can be edited down to the best-fitting parts (with the rest becoming hilarious Deleted Scenes to add to the DVD Bonus Material).

Compare The Cast Show Off, Throw It In, Audience Participation, and Official Fan-Submitted Content. See also Corpsing, which is always a risk when the other actors need to be able to keep a straight face. Not to be confused with [Trope Name], which has some overlap with this in the scripting part.

This writer in this pitch meeting is relying on the actors to just come up with funny things to say.

This writer in this pitch meeting is relying on the actors to just come up with funny things to say.