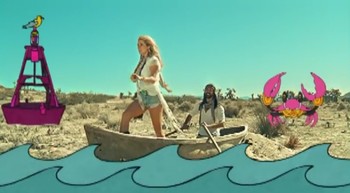 Surprisingly, things only get weirder from here.

There are a few basic routes you can take when making a music video. You can show the band performing the song, or tell a story (which may or may not relate to the song itself)... Or you can take the artistic path and just throw a bunch of weird stuff on the screen in time to the music.

These videos either have no story at all or random Mind Screwy stories. Many Animated Music Videos fall into this category. Usually the imagery will be inter cut with or somehow involve the band performing, but sometimes they go all-out and dispense with the band shots as well.