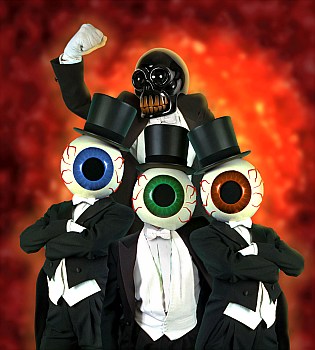 The Residents are a San Francisco-based avant-garde rock group that has released over 100 albums, starting with 1974's Meet the Residents. They helped pioneer the modern Music Video, and produced some of the creepiest songs, both original and covers, for nearly five decades — all while staying anonymous to the public.

Their persona has long been as a faceless collective who prefer to focus on their music. Their management group, The Cryptic Corporation, handles their legal affairs and public relations. The individual bandmates are credited under nicknames, when at all.

To this day, only one member is known: Hardy Fox, one of the Cryptic Corporation heads. He was the group's keyboard player, pianist and lead songwriter, among many other roles, from the founding years until 2016. It wasn't until 2017 that he admitted to being in the group. He died of brain cancer on October 30th, 2018, aged 73.

For additional info, Matt Groening wrote The True Story of The Residents

for Uncle Willie. A documentary, Theory of Obscurity: A Film About The Residents, was released in 2015.

Albums with their own TV Tropes pages: