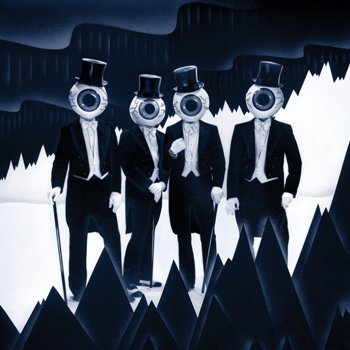 Eskimo is the 6th studio album created by Avant-Garde Music band, The Residents. Intended for release in 1977, to be a follow-up album to Fingerprince, it was delayed until September 6th, 1979.

Eskimo is a Concept Album about the day in the life of northern Native American cultures (although the band didn't study anything on Inuit culture). Unlike most Concept Albums, Eskimo is unique in that all of the songs are made up of various chanting (often in a made up language), sound effects, and percussion instruments, so instead of songs telling a story, it's more akin to soundscapes telling a very loose story with many of the details being interpreted by the listener (the liner notes can also help here). The album cover is also the first time the band appeared in their iconic 4 Eyeballs wearing suits.

Upon release, it was hailed by critics, and to this day is still considered one of The Residents' best. It was also released with a companion piece, Diskomo, which had bits and pieces from Eskimo put into disco songs.

"A Spirit Tropes A Child":