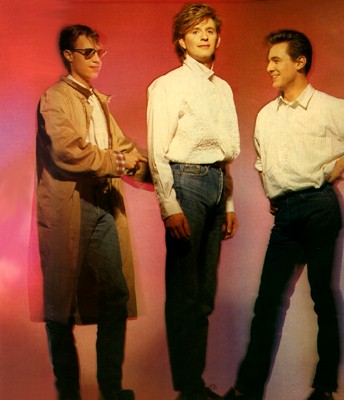 One of the many bands to come out of Post-Punk, Scritti Politti were formed in 1977 in Leeds, by Green Gartside and Niall Jinks. They're one of the bands that marked the shift from Post-Punk to its "phase two," New Pop, although, unlike other bands commonly associated with the movement, like ABC, The Associates and Frankie Goes to Hollywood, were far more intellectual, not only in their lyrics, but also in their ability of mixing Pop melodies and a certain avant-garde spikiness. Their name comes from Antonio Gramsci's political writings, which were markedly Marxist. At the height of their popularity, the band were one of the principal acts in the Sophisti-Pop sub-genre.

Other non-musical influences included people like Bakunin, Jacques Derrida (one of their songs is even called "Jacques Derrida"), Deleuze, and Lacan. They lived in a squat house in Camden Town, London, and, besides being a commune, they were also aware of various left-wing movements in Europe, interacting with them at times. They were also one of the bands more capable of practising the DIY attitude, by making their record sleeves themselves and listing production costs and their squat address in said sleeves.

Their first single "Skank Bloc Bologna" picked up a good amount of airplay on the John Peel show, and it was followed by the release of two EP's (one of them the "2nd Peel Session"). However, a greater exposure and a tour with Gang of Four and Joy Division caused Green Gartside's stage frights, coupled with a certain debilitation of his health and anxiety, to suffer a big mental breakdown.

After recovering in South Wales (Green's birthplace), he decided that Scritti should "go Pop", that is, to make music that could appeal to the masses, in order to infiltrate their ideas in a more presentable (and sugar-y) format. However, the rest of the commune weren't really happy (despite Green writing them dozens of arguments about why it would be better for them) and, one by one, started to leave (including Niall Jinks). This idea came from Green, while recovering, listening to the old stuff like Motown records and new stuff like the R'n'B that was coming out of the US.

The new songs started to come out in 1981. "The "Sweetest Girl"" was featured in a free cassette tape given by NME called C81, which also showcased bands that would also become well-known like Pere Ubu, Orange Juice, or The Raincoats. The song featured Robert Wyatt on piano. The songs were far more melodic now, as shown in their debut album, Songs To Remember, released on Rough Trade, which also showcased an interest in Reggae.

Green was also becoming more interested in Hip-Hop and, after disbanding the rest of the band, relocated to New York, and, with the help of producer Arif Mardin, David Gamson and Fred Maher, recorded the next album.

Released in 1985, Cupid and Psyche '85" was something different altogether (as previewed a year earlier in their single "Wood Beez (Pray Like Aretha Franklin)". A series of complex programmed soul/funk/dance-style songs which also put a strong emphasis on deconstruction (Derrida-style), it came at the tail end of New Pop, which was receiving a backlash in America (though it didn't stop the single "Perfect Way", which almost made the top ten on the Billboard Hot 100 during 25 weeks). Despite that, it attracted the attention of people like Miles Davis (who covered "Perfect Way" and later borrowed his trumpet for "Oh Patti (Don't Feel Sorry For Loverboy)"), Chaka Khan (whose single "Love of a Lifetime" was co-written, co-produced and featured backing vocals by Green), Elton John, and allegedly Prince.

Green and his two guys took three years to release the follow-up, Provision, which, despite having some good songs (like the aforementioned collaboration with Miles Davis and "Boom There She Was", featuring Roger Troutman of Roger & Zapp), it was mostly undistinguished late-80's dance-pop and, basically, a commercial and critical flop. Green, at the beginning of the 90's, covered a song by the Beatles and another by Gladys Knight and released them as singles and went on hiatus.

Green (now with a beard) returned in 1999 with Anomie & Bonhomie, an album that reflected and dived into the now commercially acessible and successful Hip-Hop scene, collaborating with people like Mos Def. It was a critical success, but a semi-flop in terms of sales.

In 2006 he gathered a new line-up (billed at first as 'Double G and the Traitorous 3') and performed live for the first time in more than 25 years. He released an album, White Bread, Black Beer, which got nominated for the Mercury Music Prize.

He's still performing and is recording an album. A career-spanning compilation was released in 2011, titled Absolute.

Tropes Used by the Band: