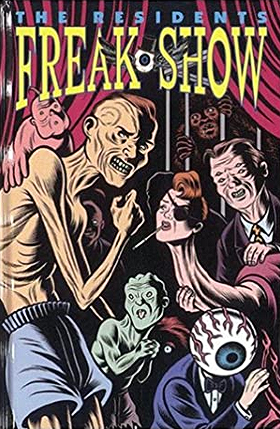 Welcome, welcome, welcome
To the House of Freaks
Prepare to see some people
with some very odd physiques
Sit back, my friends
Relax, my friends
The show is quite informal
Cause when you see these folks
You will be grateful that you're normal!
— Count Olaf, A Series of Unfortunate Events (2017)
Advertisement:

A sideshow act is a special show that involves people with strange or dangerous talents, and people with odd physical deformities or features.

Some popular staples of sideshows include:

Sideshows can serve as interesting origin stories for characters. They can also be a hiding place for characters who genuinely aren't human or have supernatural powers to hide themselves in plain sight. After all, a traveling circus is just the place for an outcast to fit in without having to put down roots in a town.

At times, sideshow performers tend to be treated badly by the owners of the traveling circus or carnival. They often are paid little, abused, overworked, and dehumanized. They are gawked at by circus-goers and treated as a spectacle. In real life, however, outright abusive management was much less common than in fiction - many wiser sideshow owners recognised that without their acts they had no income, and dealt with them more fairly. (A notable example of both is the real case of Joseph "The Elephant Man" Merrick: his London manager Tom Norman paid him well and treated him with respect, contrary to the Historical Villain Upgrade he gets in many dramatisations, but a subsequent manager stole his money and dumped him alone and penniless in the Netherlands.)

Compare Circus of Fear; some "sideshow freaks" are not exactly the nicest guys, and may be very dangerous. (Having people taunting and staring at you all day long because of some aspect of your appearance or an unusual talent you have is stressful.) Watch your step. Not to be confused with Carnival of Killers, however, which is different.

Also compare Come to Gawk, which comes up frequently in works about freak shows, as well as the Point-and-Laugh Show, which is the TV version of this trope. The Barnum is likely to be running these shows. Not to be confused with Sideshow Bob of The Simpsons infamy, who's freaky in a different way.