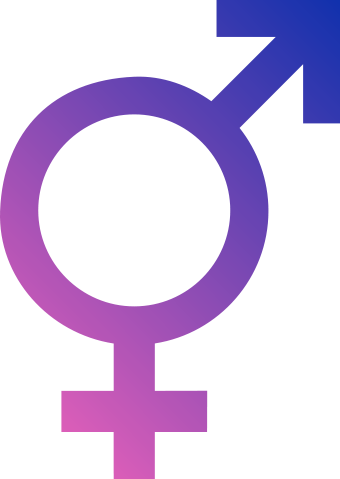 The best of both worlds (hopefully).
Advertisement:

For most fictional purposes a hermaphrodite

Intersex people usually identify as either a man or woman (although some are non-binary), and being intersex does not automatically make them both "a man and a woman". In fact, genetically speaking they would still be considered one or the other depending on the presence of a Y-chromosome, even if their phenotype is in between. Fictional depictions of intersex people are often inaccurate and full of Unfortunate Implications.

The word Hermaphrodite comes from the Greek deity Hermaphroditus. This child of Hermes and Aphrodite was born a hermaphrodite according to Diodorus Siculus (1st century BCE). According to Ovid he was a very handsome young man with whom the nymph Salmacis fell madly in love. He rejected her advances, but Salmacis clung to him and prayed fervently to never be parted from him. The gods granted her prayer by merging the two of them into a single being, half male and half female. Be Careful What You Wish For.

For characters that can actually change their sex (better fitting the biological term that shares this trope's name), see Sex Shifter.

Has been true to a certain degree way back in the starter days of doping... but surely not to that degree.