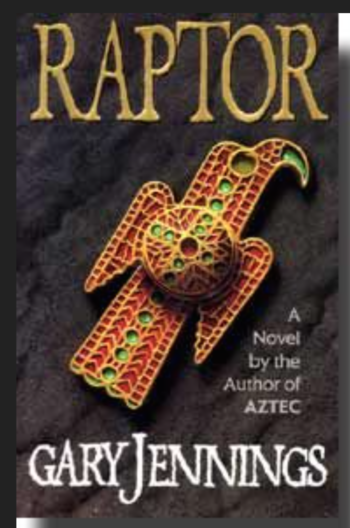 A historical novel set in the late fifth and early sixth centuries, Raptor is the tale of Thorn, a Ostrogoth wanderer whose true nature must be kept a secret. Thorn is a hermaphrodite, both male and female, and dual genders are a dangerous thing to possess in the dying Roman Empire. A mannamavi, a man-maiden, would be an enslaved freak at best and a monster to be slaughtered at worst. Thorn seeks to survive by creating two separate identities, the male Thorn and the female Veleda, and living a double life. Thorn serves King Theodoric the Great as he seeks to create an Ostrogoth empire, Veleda fights to overthrow the tyrant Strabo, and both find family, friends, and lovers among those they meet. Together, the two people in one intersex body fight, explore, and romance their way through the monasteries, convents, palaces, and battlefields of Europe. But it becomes hard to separate Thorn and Veleda, and even harder to keep the world from discovering their secret. And when another hermaphrodite enters their lives, everything starts to collapse.

By Gary Jennings, Raptor is a meticulously researched historical epic. Thorn and Veleda's travails happen amidst real-life events such as the fall of the Western Roman Empire, the civil war for the kingship of the Ostrogoths, the clash of Arianism versus Catholicism, and the plunging of Europe into the Dark Ages. The Goths and Romans are the peoples most featured, and their languages and cultures are accurately described, but Celts, Huns, Syrians, and Greeks appear and create a diverse cast of characters. As typical for Jennings' other novels (such as Aztec), graphic violence and bizarre sexual situations abound. More importantly, Raptor follows in the Jennings tradition of detailing a fascinating character's entire life, and in giving that life only one constant: those whom the hero loves, will die.