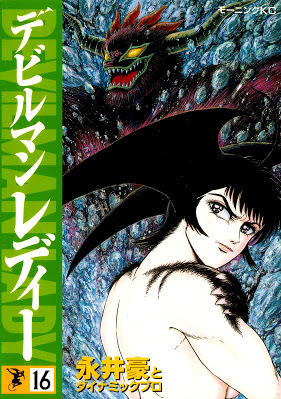 Time to get it back.
Advertisement:

Devilman Lady (also called The Devil Lady in the United States) is an anime and manga by Go Nagai. Published from 1997 to 2000, it is both a reimagining and a Stealth Sequel of sorts to the Devilman series, only with a female protagonist rather than a male one. It also has connections with an alternate version of Mao Dante, the unfinished manga that led Nagai to create Devilman in the first place.

Jun Fudo is a physical education teacher and former athlete living a happy life in Japan. One day, the usually shy and kind Jun starts sensing animalistic urges, which end up in a bestial transformation when she and her students are attacked by demonic mutants. Turned into a Devilman, a demoness with superhuman strength and abilities, Jun butchers the monsters to protect the girls. She is later contacted by a psychic named Lan Asuka, who reveals Jun the truth: the world is being threatened by the Devil Beast Syndrome, a phenomenon that turns selected humans into evil monsters, and only those who can control their transformation, the Devilmen, can help the human alliance (conveniently led by Jun's father) to avoid more crimes.

Set to become the heroine the world needs, Jun joins the alliance and becomes a hunter of Devil Beasts with the help of Lan, Professor Fudo and their coworkers. It's only after tracking a particularly difficult case to the sinister Grumech embassy, however, that she discovers the first hint there is much more behind this seemingly (un)natural phenomenon: a secret leading to the very gates of Hell, where hidden powers await to make an appearance from beyond time and space...

The series is known within the yuri fandom for the heavily subtexted relationships between the protagonist and several female characters.

It received an anime adaptation in 1998. It deviated greatly from the manga, although not as much as the old Devilman anime from its own source material.