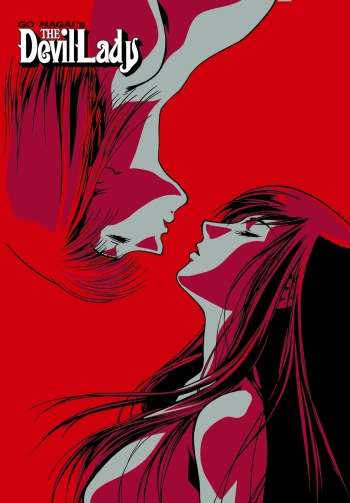 Their relationship is completely platonic!
Advertisement:

Devilman Lady is a 1998 anime based on the manga Devilman Lady by Go Nagai. It deviates greatly from the manga, although not as much as the old Devilman anime from its source material. Chiaki Konaka was a writer for the show.

Jun Fudo is a beautiful supermodel who is idolized by many. She also has a dark secret that not even she knows about at first, for within her lie the genes that hold the next step in the evolution of mankind, the same blood as the Devil Beasts, beast-like superhumans that terrorize the city. Unlike the rest of them, however, Jun has managed to hold a tenuous grip onto her humanity, and she is recruited by the mysterious Lan Asuka, member of a secret organization within the government, aimed at controlling and/or eliminating the berserk destroyers of humanity. Jun, as Devil Lady, must now save humanity by exterminating her own kind and stopping the machinations of Satoru, the wicked boy who leads the Devil Beasts, but it is unclear how much longer Jun can keep her sanity in a situation she never chose to begin with.

The series was distributed by ADV Films, and was directed by Toshiki Hirano.