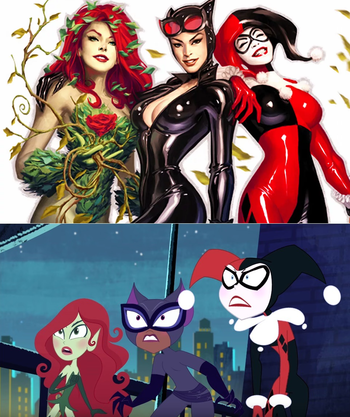 How to put your coquettish comic characters in a chaste cartoon.
Krusty: Now, boys, uh, the network has a problem with some of your lyrics. Would you mind changing them for the show?
Red Hot Chili Peppers: Forget you, clown. Our lyrics are like our children, man. No way.
Krusty: Well, okay. But here, where you say, "What I got/You gotta get/And put it in you" — how about just, "What I'd like/Is I'd like to/Hug and kiss you"?
Red Hot Chili Peppers: Wow, that's much better. Everyone can enjoy that.
— The Simpsons, "Krusty Gets Kancelled"
Advertisement:

The chaste twin of Hotter and Sexier, when something is Tone Shifted to be far less sexual and vulgar than an earlier incarnation or installment.

Possible reasons for this shift in tone include the creators thinking of the censors, wanting a bigger audience for their material, or the former sexual content being an Old Shame.

One tool creators might use to achieve this includes the Digital Bikini, especially in anime works.

Also related to Bowdlerise, which is about editing questionable or offensive content from a work; and Lighter and Softer, especially when the work opens itself up for children.

Not to Be Confused with Bleached Underpants, where a creator's works become tamer and chaster over the course of a career. This trope refers only to changes within a single work or franchise.