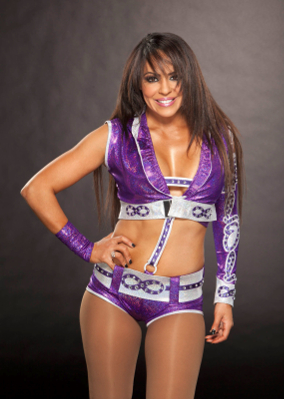 Layla El-Young (born 25 June 1977), simply known by her first name Layla, is a retired English dancer and professional wrestler, who worked with WWE from 2006 to 2015.

After some years as a South Florida dancer for Carnival Cruise Lines and the NBA's Miami Heat (her last year being the Heat's first championship season), she entered the 2006 WWE Diva Search and won the competition for the prize of a $250,000 contract with WWE. She became a mainstay of the Divas division and is a former WWE Divas Champion. She is most well-known for being one half of the heel duo LayCool.

On July 29, 2015, Layla announced in an interview with WWE.com that she was retiring from WWE. Shortly before her departure, she clocked nine years in the WWE, making her the longest tenured woman wrestler in the company. (Though Natalya Neidhart and Alicia Fox have since surpassed her).

In 2021, she announced she was working on an autobiography.