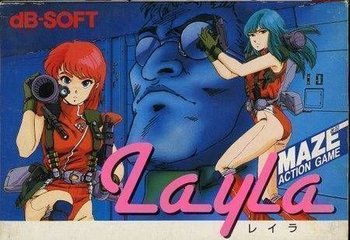 Layla and Iris are about to shoot you.
Advertisement:

Layla is a platform game by dB-Soft released in 1986 exclusively for the Nintendo Famicom. It was marketed as a "maze action game", since levels are mostly non-linear and it's easy to get lost. The eponymous trigger-happy and cake-fueled heroine has to traverse eight asteroids full of various perils in order to rescue her partner Iris and apprehend an evil scientist who's behind all the havoc. The game's character design and Excuse Plot are strongly reminiscent of Dirty Pair franchise. Layla is known to non-Japanese players mostly thanks to one Game Center CX episode.

In 2017 a Fan Sequel hack The Iris Missions

was released, which also tweaks game's mechanics and features a completely new soundtrack

Completely unrelated to the female wrestler of the same name.