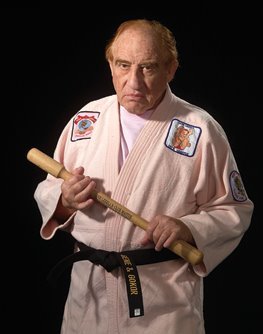 "Bruce Lee's bodyguard was a very good friend of mine: Gene LeBell. When Bruce Lee got in problems, they called for LeBell to take care of it."
—Billy Robinson, pro wrestling Hall of Famer
Advertisement:

Ivan Gene LeBell (born October 9, 1932 - August 9, 2022) is a judoka, Professional Wrestler and Mixed Martial Arts trainer. He started his career training catch wrestling and some boxing, but it was in judo where he shined, gaining several championships and being sent to the Kodokan school in Japan, where he cleaned house. Back in United States, he competed in the regional pro wrestling circuit without much success until 1963, year in which he took part in a primitive (and ridiculously rigged against him) style vs style fight against boxing champion Milo Savage, who LeBell ended choking out. Now as a known name in the world of martial arts, LeBell went to work as a stuntman, actor and choreographer, eventually befriending Bruce Lee and Chuck Norris. He also stood out as a trainer, founding the Hayastan academy along his pal and apprentice Gokor Chivichyan and being the man behind MMA fighter Ronda Rousey.

LeBell is one of those charismatic if controversial guys in the mixed martial arts business. He might have taken part in some awkward incident with Steven Seagal, and he also has some opinions about Bruce Lee which are debated and disputed. But he is possibly most famous as the flagbearer for the Real Men Wear Pink trope.