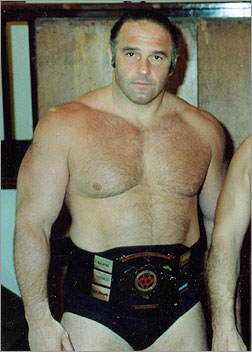 "Stand for the Haze!"
—Kevin Sullivan in the vignette

that introduced the Purple Haze.

Mark Lewin (born March 16, 1937 in Buffalo, NY) is a retired American Professional Wrestler who competed from the 1950s all the way into the 1990s. He started as a matinee idol Face and was very successful in that role. In fact, Vince McMahon Sr. called Lewin "the best babyface I ever had." In 1963, he started calling himself "Maniac" Mark Lewin, creating the persona that would carry him through much of his career. He competed all over the world, including for the WWWF, various National Wrestling Alliance territories, Stampede Wrestling, All Japan Pro Wrestling, Australia, Canada and more. In the 1980s, he arrived in Florida and was reintroduced as the Purple Haze, a member of Kevin Sullivan's Army of Darkness. Among his in-ring achievements, he is a former 2x WWWF United States Tag Team Champion

"Stand for the Haze's tropes!":