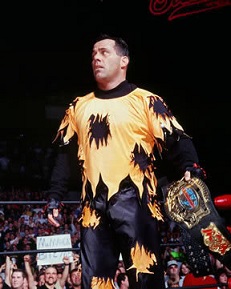 Dean Simon (born August 4, 1960 in Irvington, New Jersey) is a retired American professional wrestler, trainer and official best known for his work for ECW, WCW and WWE as Dean Malenko. He started his career in 1979 in Florida allied with his father Boris and brother Joe. They had actually broken away from the established Championship Wrestling from Florida to form their own outlaw (runs in the same geographical area as an established territory in opposition) promotion called Sun Belt Wrestling, which did not last very long. He and Joe competed around the Florida independent scene as well as in Japan and in WCW before Joe retired. Malenko became a regular in New Japan Pro-Wrestling's rising Junior Heavyweight scene, often facing and/or teaming with Chris Benoit, who was usually known as either Wild Pegasus or the Pegasus Kid, or Eddie Guerrero, often known as Black Tiger #2. Malenko went to ECW in 1994, where he would go on to hold the ECW World Television Title

once with Benoit. Malenko continued his feud with Guerrero after he arrived in early 1995. All three went to WCW in the fall of 1995, with ECW announcer Joey Styles explaining it as being due to something in their contracts with New Japan, which had a working relationship with WCW. In WCW, Malenko would go on to hold the WCW United States Heavyweight Title

once with Benoit. He made his PPV debut successfully defending the WCW World Cruiserweight Title against fellow second-generation wrestler Brad Armstrong at WCW Slamboree 96. All three along with Perry Saturn jumped to WWE at the start of 2000. Malenko would have two runs with the WWF World Light Heavyweight Title

and would retire from full-time competition in 2001.

In May 2019, he became a producer for All Elite Wrestling. He made a minor appearance in front of the cameras as one of the three judges appointed for the Championship match between Cody Rhodes and his old enemy Chris Jericho at Full Gear, and later got caught up in the feud between the face-turned Jericho's faction the Inner Circle and their rivals The Pinnacle in 2021.