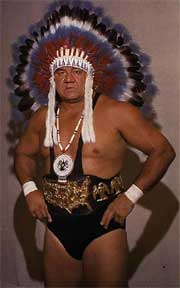 Edward McDaniel (June 19, 1938 – April 18, 2002) was a Native American football player turned Professional Wrestler as Chief Wahoo McDaniel. He started his football career in the 1960s and would wrestle in the off-season, until he turned full-time by the end of the decade. He regularly competed in various National Wrestling Alliance territories, particularly in Texas, Florida, Georgia and the Carolinas, as well as for the AWA, All Japan Pro Wrestling, the WWWF, New Japan Pro-Wrestling and various independent promotions. He made his PPV debut defeating Manny Fernandez in an Indian Strap Match at AWA SuperClash III. Among his in-ring achievements, he was a 1x AWA World Tag Team Champion

with The Crusher, a 5x NWA United States Heavyweight Champion

. He passed away from complications from diabetes and renal failure on April 18, 2002. He was inducted into the Wrestling Observer Newsletter Hall of Fame in 2002.