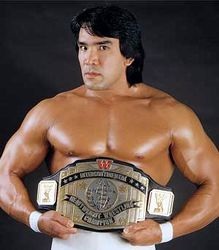 "Competition has always been good."
Advertisement:

Richard Henry Blood, Sr. (born February 28, 1953) is a retired American professional wrestler, better known by his ring name Ricky "The Dragon" Steamboat. He has worked for brands like All Japan Pro Wrestling, AWA, WCW and WWE. Known for being one of the few wrestlers to have stayed a Face for his entire twenty year career.

Among his in-ring achievements, he is a former 2x NWA (Mid-Atlantic) Television Champion

"The Dragon's tropes will SCORCH YOUR BACK!":