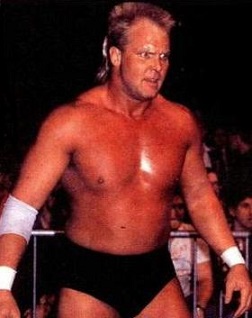 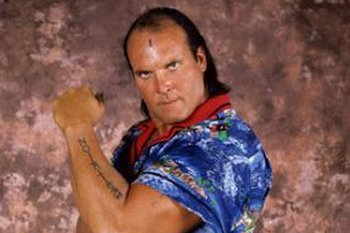 As Waylon Mercy
"Lives are gonna be in Waylon Mercy's hands. You know what I mean?"
Advertisement:

Daniel Eugene Spivey (born October 14, 1952) is a retired American Professional Wrestler from Tampa, Florida who competed in the 1980s and 1990s primarily in Florida, for WWE, the World Wrestling Council in Puerto Rico, WCW and All Japan Pro Wrestling. He made his PPV debut in the battle royal that was part of the Chicago stage of WrestleMania II. He was an opponent in Bruiser Brody's last match, which was Spivey and Abdullah the Butcher vs. Brody and Carlos Colon, at the WWC's July 15, 1988 show. His last run, in 1995 WWE, saw him compete as Waylon Mercy, a character derived from Robert De Niro's portrayal of Max Cady in the 1991 remake of Cape Fear. He is a former All Japan Pro Wrestling World Tag Team Champion

"Tropes are gonna be in Waylon Mercy's hands. You know what I mean?"