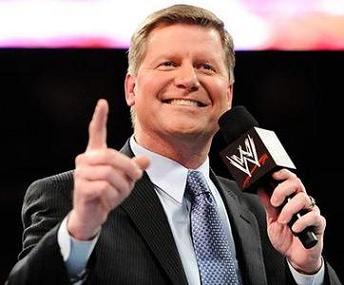 John Joseph Laurinaitis (born July 31, 1962) is a former wrestler under the name Johnny Ace. He is a 4-time All Japan Pro Wrestling World Tag Team Champion, holding the belts once with "Dr. Death" Steve Williams, twice with Kenta Kobashi and once with Mike Barton (formerly WWE's Bart Gunn), and a 2-time AJPW All Asia Tag Team Champion, holding the belts both times with Kobashi.

He mainly wrestled in Japan before his retirement, then became the head booker for WCW, replacing the outgoing Vince Russo. This job proved less-than-secure in 2001, so he jumped ship to WWE: first as a road agent, then as the now-infamous head of Talent Relations until 2012 (see below). He also briefly served as on-screen "General Manager" of both Raw and SmackDown.

Nowadays Laurinatis seems content to just enjoy his retirement, though he still makes the sporadic appearance. He is currently married to Kathy Colace, the mother of WWE's Bella Twins.