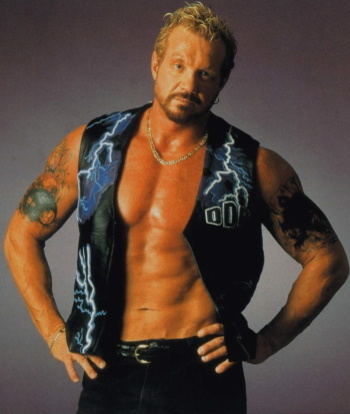 "Diamond" Dallas Page (born Page Joseph Falkinburg, Jr. on April 5, 1956) is an American semi-retired professional wrestler and fitness instructor best known for his stint in WCW. He'd actually debuted as a manager in the AWA in the 80s, but some time after he showed up in WCW, he made the transition to a wrestler. Gradually, over the next decade, he became one of the biggest names WCW had to offer, with a showy personality and one of the most popular Finishing Moves in the business (the Diamond Cutter), until the company's buyout in 2001.

He became a major player in the "Invasion" storyline following WWE's buyout of WCW, and was so excited to work for WWE that he took a buyout on his contract to the tune of $.50 on a dollar. What happened was an abysmal trainwreck of a storyline that ended with him playing the part of a stalker, and later leaving the business altogether.

As with many wrestlers, his years in the business had a severe physical toll. After leaving wrestling, he turned to Yoga to help rehabilitate his body and became an absolute fanatic when he realized how much of a positive effect it had on his life. Realizing that most men think of yoga as being a "feminine" pursuit, he developed "Yoga for Regular Guys" and launched a health and fitness website, along with a line of classes and instructional videos, before rebranding it as "DDP Yoga

In recent years, DDP has used DDP Yoga to help rehabilitate wrestlers who have been having issues with drugs and alcohol. Two of his most noteworthy charges have been Jake "the Snake" Roberts and Scott Hall/Razor Ramon.

, holding the belts w/Bam Bam Bigelow and Kanyon as the Jersey Triad and 1x w/Kevin Nash as the Insiders, a 1x WWE World Tag Team Champion

"These tropes are gonna feel the BANG!":

"This is the end of my trope page. But that's not a bad thing... That's a good thing. Why? Because now you can go read another page on this wiki!"