A Lady on Each Arm 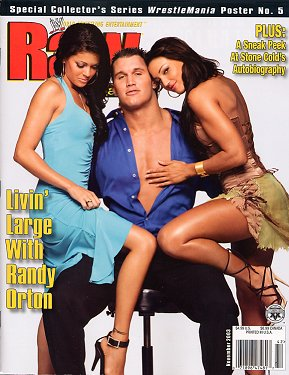 Never leave home without your trophies.
"A redhead on my left arm
A brunette on my right
A blonde or two to hold the candles
Now that seems just about right, eh, Louis?"
— Prince Naveen, The Princess and the Frog, "When We're Human"
Advertisement:

A common Establishing Character Moment. A man walks into a room, arms intertwined with those of two conventionally attractive ladies, displaying them as trophies to show what a badass stud he is. Conversely, the ladies may get on his arms mid-scene just to imply that everything's goin' pimpin'. Very commonly, the women won't have names (or, if the trope is Played for Laughs, the guy simply can't remember their names and refers to them with a wide range of incorrect names), nor will they say anything: they're just there to act as props for the male character. If they do get to speak, it'll probably only be to imply that they’re going to have sex with the man later. It is he who decides what they’re going to do and where they're going to go, while the ladies just follow around and agree with everything the stud says. After all, men are defined by their actions and women by their passiveness. "A lady on each leg" is a variant of this trope that takes place when the man is sitting down, with the women at his feet. Or perhaps even one sitting on each knee.

The man in question is almost always a Hunk (handsome and manly), and at the same time a Casanova. He likely engages in sexual activities out of the blue, making him a Pornomancer, and very often the ladies follow him around because he's well endowed in the penis department. If he's accompanied by more than two women, then it would be a case of Sexy Man, Instant Harem. In promotional posters and artwork, the ladies are commonly found clinging to his feet. If the story is set in high school or college, then he'll probably be the Big Man on Campus.

Not to be confused with Lover Tug-of-War, where two women are physically fighting over a man. On the contrary, the ladies of A Lady on Each Arm are passive to the point where they accept the fact that the man has other women for him as well.

Due to gender double standards, this trope almost always applies to men, given that women are usually shamed for having multiple sexual partners (or even just one). On a further note, this trope almost exclusively applies to straight men, given that queer people that enjoy and fully explore their sexuality are usually villainized in media. Straight men, on the other hand, get to be badasses for having an active sex life and being in control of their surroundings. The man in question will also probably be white since men of color with multiple partners very often come off as perverts in media.

The Japanese also call this trope "a flower in each hand" (両手に花, "ryoute ni hana").