Video Game / The King of Fighters '96 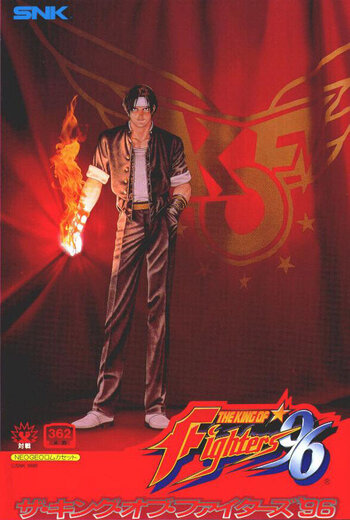 "An epic selection of battlers in history! Can you feel the heat?"
"Violent fighting to come again! As a year flew by from the excitement, we now declare the opening of our special team tournament again... In 1996!"
—Opening Narration
The King of Fighters '96 is the third installment of The King of Fighters, released on July 30, 1996 for arcades and the Neo Geo.
Advertisement:

After two worldwide annual fighting tournaments, KOF has become a international phenomenon that's grabbed the attention of many powerful sponsors. Nine teams of three are competing for the KOF title, among them are faces old and new to the series. Takuma and Heidern have stepped down from their respective teams, with younger blood, Yuri and Leona, taking their places. Geese Howard, the Big Bad of Fatal Fury, decides to join with fellow villains Wolfgang Krauser and Mr. Big to form Team Boss. Iori Yagami is back forming a team with Rugal's former secretaries, Mature and Vice, and he continues to have a bone to pick with The Hero, Kyo Kusanagi. The tournament host this time around is a beautiful yet mysterious woman named Chizuru Kagura, who seems to have a connection to both Kyo and Iori's clans and warns about the upcoming rebirth of the Orochi.

KOF '96 is a huge turning point for the series. New systems are introduced, many replacing the old ones. An official Story Arc (the Orochi Saga) started to take place, encompassing multiple installments. In other words, this is the first step toward the KOF we know and love today.

The concept of the Dash and the Emergency Evasion roll was first introduced, as well as the Tech Grab (used to deflect the normal grab) and the Air Guard. Countering your opponent with a special move send them flying, opening a chance for extra Air Combo. Maxing out your power gauge, now called the MAX Mode, grants extra attack power and access to Desperation Moves ("DM" for short) as usual, but you can Guard Cancel as a reversal while blocking the opponent's attack, activating the evasive roll to ambush them. Some characters have more than one DM, and when you're both in the MAX Mode and on low health, using your DMs unleashes a stronger version of them, instead of just a recycled same DM with more damage.

It was ported to the PlayStation and the Sega Saturn, and the Game Boy port was released as The King of Fighters: Heat of Battle, adding Takuma in his Mr. Karate persona, as well as alternate versions of Iori, Leona and Chizuru.

Teams in this version
'96 is where the roster really started to shake things up, not just in who's in the game but the members of each team, with some teams shuffling their members from the previous installment.