Characters are listed by game of introduction.

Characters introduced in Art of Fighting 2 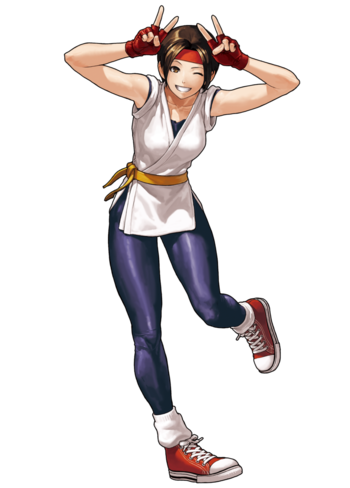 From KOF XIII
Click to see her as an NPC 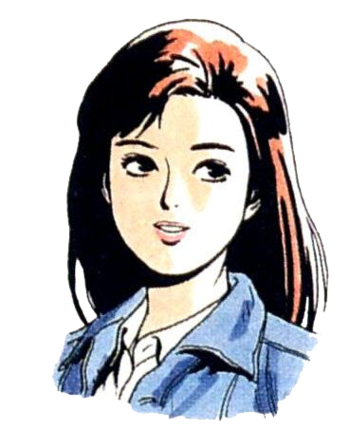 From AOF
Click to see her first playable design 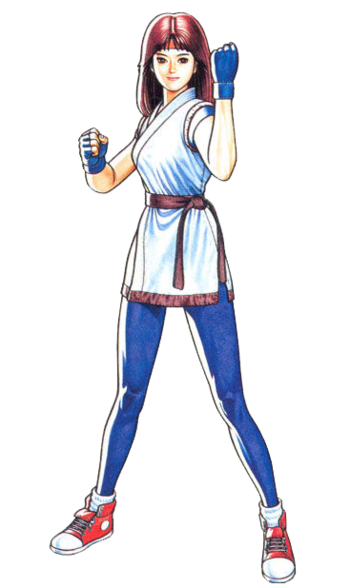 From AOF2
I'm Kyokugen! Face it, Ryo! You're not fit to sweep for me!
Origin: Japan flag

Fighting Style: Kyokugenryu Karate
Voiced by: note Harumi Ikoma (AOF1), Kaori Horie (2-3), Ayumi Hamasaki (OVA, Japanese), Veronica Taylor (OVA, English), Kaori Horie ('95-XIII), Ai Kakuma (XIV onward, The King of Fighters: Destiny), Amy Walls (Maximum Impact series, English), Sakura Tange ('94 Dengeki Bunko drama CD)
Takuma's daughter and Ryo's younger sister. She was kidnapped in order for Mr. Big to use Takuma against Ryo and Robert, but after she was rescued by Ryo and Robert she trained with Takuma and started entering The King of Fighters tournaments, generally with King and Mai. However, in some installments she would switch teams, sometimes running with Robert and her family note ('96-'99, '01, '03, XI, XIV) and other times with Mai and Kingnote ('94-'95, '00, '02, XIII).
Eiji Kisaragi 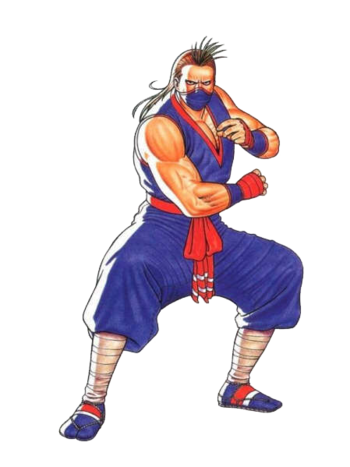 From AOF 2
I'm a ninja! I have no pity for losers!
Origin: Japan flag

Fighting Style: Kisaragi-ryuu Ninjutsu
Voiced by: note Yoshinori Shima
A ninja assigned by Mr. Big to assassinate the Sakazaki family. He has failed repeatedly to do this, but nonetheless still pursues his goal. He joined up with Billy and Iori in the KOF '95 tournament to form the Rival Team, but the three failed to reach the finals; Iori beat the two ruthlessly for their failure, resulting in a lifelong grudge from them. He also joined up with Kasumi and Malin in the eleventh tournament to form the Anti-Kyokugen team. If the KOF: Kyo manga is canon, he may have had a hilariously nasty run-in with Kyo's mother Shizuka at one point, too.
Temjin 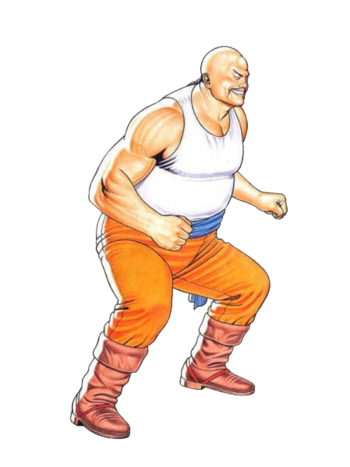 Fighting Style: Mongolian Wrestling
Temjin is a Mongolian wrestler who works as a dock worker at the Southtown port to raise money for a school in Mongolia. He enters the tournament to get the prize money and make his dream come true.
Geese Howard

Fighting Style: Aiki-Jujutsu
The commissioner of South Town's police, and even more corrupt than Mr. Big. He appears as a secret boss in Art of Fighting 2, and goes on (chronologically) to become an even worse danger to Southtown once we reach Fatal Fury.
See Fatal Fury - Geese Howard for tropes on him
Advertisement:

Characters introduced in Art of Fighting 3 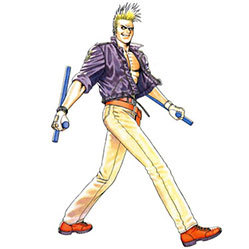 Fighting Style: Tonfas
Rody Birts is a bounty hunter and partner of Lenny Creston, who has been hired by Wyler to find Freia Lawrence.
Kasumi Todoh 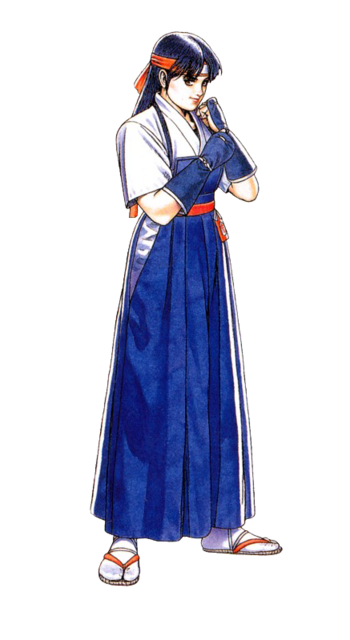 The honor of the Todoh school is in my hands. Me, the daughter of Ryuhaku!
Origin: Japan flag

Fighting Style: Todohryu Aikijutsu
Voiced by: note Masae Yumi (KOF XI to 2002), Rui Tanabe (KOF All Star, Onwards)
Kasumi is the daughter of Ryuhaku Todoh, the first enemy in the original Art of Fighting. She grew up learning the Todoh school of Aikido and Kobujutsu, taught to her by her father. As her family's sole heir, she does all she can to stand up for the Todoh way. When Ryuhaku stayed at Southtown to settle an old score with a man named Takuma Sakazaki, Kasumi remained in her house, waiting for her father's return. A couple of months later, she got some bad news: Ryuhaku had been defeated by Ryo Sakazaki, Takuma's son and hasn't been seen since. She decided to fight Ryo and anybody else in order to avenge her father. Unfortunately enough, her mother Mizuho did not like that idea. But she eventually makes peace with him and returns to Japan with her mother.
Wang Koh-San 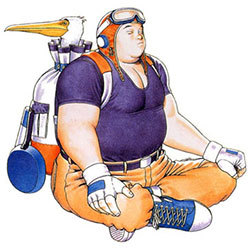 Fighting Style: Xinyiliuhequan
Wang went to Glass Hill for inspiration for a drawing he plans to enter in a contest, Wang heard about Wyler's attempt to create a powerful elixir, and decided to attempt to find it himself for his friend Lee Pai Long.
Lenny Creston 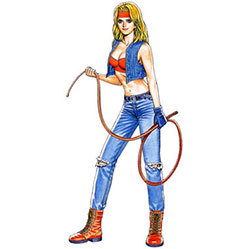 Fighting Style: Whip Handling
Lenny Creston is a journalist and partner of Rody Birts, who has been hired by Wyler to find Freia Lawrence.
Advertisement:
Karman Cole 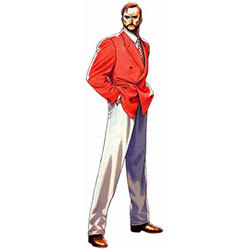 Fighting Style: Art of Self-Defense
Karman is an assistant to the Garcias who has been sent to find Robert, who left for Glasshill Valley to look for his childhood friend Freia.
Jin Fu-Ha 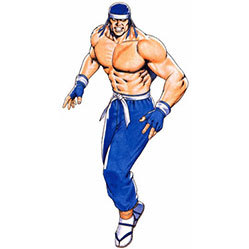 Fighting Style: Ninjutsu
Jin Fu-Ha is a was once the disciple of Eiji Kisaragi who was betrayed by his master. He has come to Glass Hill to test his skills against Ryo Sakazaki.
Sinclair 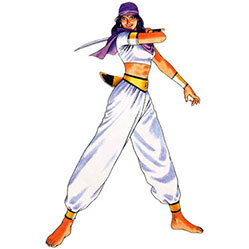 Fighting Style: Sqay
Voiced by: note Harumi Ikoma
Sinclair is the assistant of main antagonist Wyler. She is secretly looking for somebody to convince him to give up his pursuit of the drug he is attempting to create.
Wyler 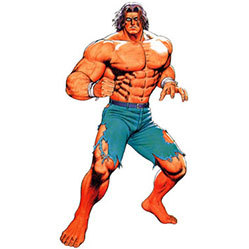 Origin: Unknown
Fighting Style: Original Grappling Style
Voiced by: note Monster Maezuka
Wyler is looking for Freia Lawrence, the daughter of his dead father's former partner, who possesses information about a formula for some kind of "Jekyll and Hyde" formula that he is attempting to create. The essential data needed for completing it was taken by Freia's father when the two's partnership broke up. Wyler believes this action is the cause of his father becoming destitute and even the cause of his death. Freia now has the data.
Wyler hires the private investigator partnership of Rody Birts and Lenny Creston to find her (they are convinced it is for romantic reasons). Freia is also being sought out by her old childhood friend Robert Garcia. Wyler finds Freia, though seemingly without the help of the private eyes he hired, completes his elixir and takes it himself, turning into a large Hulk-like man. However, it has an unforeseen after-effect and reverts his mind to a child-like state. Freia chose to stay and tend to him...