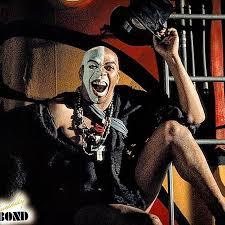 Trust the Enigmatic Minion to have the last laugh...note And how did he get on the front of the train? and wasn't he dead earlier??
Jess: You're not seriously going to fight us again, are you?
Hawke: I have no desire to trade blows with you. I'm going to bow out for the time being. There are some things I must investigate before I commit myself to this.
Max: There he goes. What is it with that guy? Even when he loses, he acts like he won.
— Advance Wars: Dual Strike

The Enigmatic Minion is a strange, specific type of villain. Put simply, they are a non-Big Bad antagonist whose agenda, motivations and villain cred itself remain highly ambiguous for much of the story. Whether as a Monster of the Week or as a long-term villain, Enigmatic Minions are defined by their ambiguous nature and the suspicion they evoke, both in the heroes and in the audience. There is certainly something altogether 'not right' about them, but it is difficult to say how or why they act the way they do.

The Enigmatic Minion lacks any obvious motives and desires to be discerned by the heroes or the viewer, and certainly won't reveal them if asked. In fact, good luck getting anything more than Cryptic Conversation out of them. Despite assurances that they're antagonistic, they obviously have a free will of sorts and a modus operandi that does not entirely follow the expected for a villain. An Enigmatic Minion may take actions that turn out to help the heroes in the end, or shower an unusual amount of personal attention on their progress without opposing them. The minion will seem to know a lot more than they're letting on, possibly even more so than the Big Bad they are seemingly aligned with.

If a member of an evil organization, the Enigmatic Minion will usually hold a prominent position, be trusted by the Big Bad, or has a job only they are capable of doing, which would explain why they're being kept around. This importance also keeps the minion safe from You Have Failed Me moments, at least for as long as the Big Bad thinks they are still on the same side. Enigmatic Minions usually don't 'fit' their assigned role, whether they're satisfied with it or not. And in the case of the latter, they certainly won't admit it.

Eventually, the story may offer a Reveal as to the minion's true nature. This can be anything from being The Man in Front of the Man to being Good All Along. Other times it may not and leave the character as mysterious as when they appeared. Expect an All-Loving Hero to attempt to befriend this type of character, which may or may not take.

The Enigmatic Minion falls somewhere between a villain and a Wild Card in a story, and fills a mold similar to the Lovable Traitor. They may be constructed as a Worthy Opponent, although an extremely ambiguous one .

Compare with the Hidden Agenda Villain, who is a clear villain— and also clearly a Big Bad— but whose plans are unknown. The Stealth Mentor will frequently take on this guise as part of their teaching process. Also compare the Aloof Ally, who is commonly mistaken for an Enigmatic Minion in their first appearances, but isn't a villain, just a jerk, and the Mysterious Backer, who's this trope with the "Minion" part replaced with "Big Good". Subtrope of Mysterious Stranger.