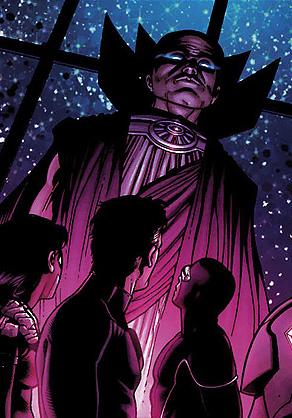 Don't mind me. I'm just here to spectate.
"I observe and record. I do not interfere."
— Uatu, Fantastic Four #13... and many times after
Advertisement:

A recurring character whose role is, well, to Watch and literally nothing else. Yet, strangely, instead of remaining completely passive it will probably give some advice to the hero and then disappear, or otherwise interfere in some small (but important) way to help the heroes triumph. Indeed, given the various observer effects

, if they were really doing their job, they shouldn't be detectable at all. Often explained by saying The Watcher has some rules which restrict it from taking action, and it will then regularly ignore this Obstructive Code of Conduct as much as it can...

Also see The Mentor and the Mysterious Informant. Frequently an All-Powerful Bystander. Normally a Fantastic Anthropologist. Compare The Omniscient Council of Vagueness.