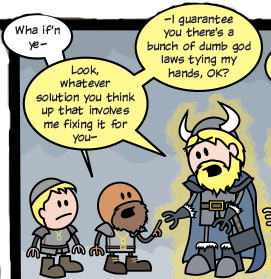 "Even the gods are bound by laws, Kaelyn."
— Kelemvor, Neverwinter Nights 2: Mask of the Betrayer
Advertisement:

There's a nasty enemy out there; a threat so nasty that even the gods are helpless before it or seemingly powerless to stop it. It turns out that while the gods are vulnerable or ineffectual in dealing with this enemy, a mortal is less so. So it's up to a mortal (i.e. Our Hero) to save the day. When this trope is in effect, there will be no Bolt of Divine Retribution and the most support The Hero can expect to get is a Holy Hand Grenade.

Within fictional works this can go two ways. If treated intelligently a valid reason will be provided as to why there is no Divine Intervention. If handled poorly by the writer, it can come off as a weak apologetic excuse as to why the supposed omnipotent Big Good is standing idly by and not helping, while the mortals risk life and limb. If no satisfactory explanation is offered, then The Gods Must Be Lazy.

Examples or variations of this trope include:

Only in rare circumstances can this apparent 'deadlock' be broken, for example, the devil goes back on his word or the balance of power shifts unexpectedly.

Not to be confused with Good Is Impotent. Compare Neglectful Precursors, Omniscient Morality License, and All-Powerful Bystander. Contrast with Bolt of Divine Retribution and Smite Me, O Mighty Smiter!.