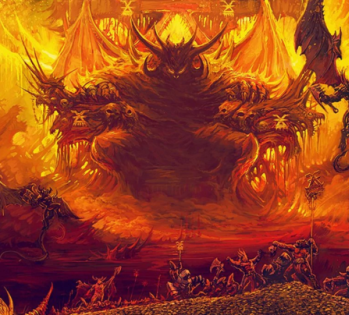 "BLOOD FOR THE BLOOD GOD!
SKULLS FOR THE SKULL THRONE! LET THE GALAXY BUUUUUUUUUUUURN!!!"
"I am called a villain, but mine is a doctrine reflected in the unspoken truths behind all other philosophies. Recognize that truth, my child: Strife is the single element most essential to meaning and existence. Without conflict, without struggle, all of creation might as well be so many unmoving, unfeeling stones. Without me to hate, who would have cause to call themselves holy or just?"
— The Book of Charnel, Sacrifice
Advertisement:

In a polytheistic religion each God and Goddess serves a specific role and fills a certain niche: love, life, war, death, and everything in between; be it Aardvarks or Zebras. One such incredibly vital purpose, believe it or not, is Evil.

Please allow us to play as (uncomfortably) literal Devil's Advocates. On the one hand, the Balance Between Good and Evil must perforce have Evil to balance Good, lest the latter become an intolerant conformist theocracy. Likewise, it also serves as a definition of what not to do for worshipers of all the Good and Neutral gods. Most importantly for purposes of this Wiki, it also serves as an excellent plot enabler and antagonist for the heroes and forces of good to fight against.

Being the absolute apex of the Sliding Scale of Villain Threat, The Chosen One can spend an entire series fighting their way up from the Religion of Evil, the Black Pope, its Dark Messiah, and then fight the God of Evil itself... or at least enable a good god that was a Sealed Good in a Can to do so.

This God/dess Of Evil can take any shape or form... not just as a master tempter and deceiver, but—because evil includes a heady and large portfolio—as Characters they can have as varying a range of personalities as any normal villains.

Here are a few popular variants: Standard Gods Of Evil can take after Satan, being rebels from The Light or God of Good and tempting peasant and king alike. Kind of a non-denominational counterpart of Crystal Dragon Jesus. However, most aren't futile rebels; they are very real and threats often motivated by goals other than rebellion for its own sake. The Grim Reaper is at times represented as a God of Evil, wanting nothing but the death of every living thing, and the protagonist in particular. War too may be shown this way, desiring to bring about a world where Asskicking Leads to Leadership and the weak are killed just for being weak... which does raise the question of whether or not it's ironic for heroes to vanquish them by fighting. If they have any philosophy, ethos, or commandment, it's usually that Might Makes Right, that ethics and morality are mere shackles for The Fettered masses of Muggles, and that Evil represents the path to power.

Not surprisingly, they tend to be cruel, dominating and treacherous. If there is more than one God of Evil in a setting, they usually engage in Eviler than Thou, betraying each other before any lasting headway against the forces of good can be made. Their metaphysical home, where worshipers and non-worshiping sinners end up, is usually akin to Hell. Given the above, why would anyone worship them? Well, they usually offer worshipers power in life via a Deal with the Devil, fine print and afterlife be damned (literally). Plus, just because they'll go to hell if/when they die, doesn't mean they'll be tortured souls... they might become the torturers. Provided they don't fail their dark lord first, that is. And of course, most gods of evil are worshipped out of fear of what would happen if they stopped worshipping. Is it any surprise their pawns in the Divine Chessboard are usually unwitting or unwilling?

Their followers include Cults, the Religion of Evil and Path of Inspiration. Necromancers and Infernalists usually get their powers by worshipping them. Expect them to forge many an Artifact of Doom as a source/repository of their power. When they or their agents are actively recruiting, expect them to be The Corrupter. They're a Card-Carrying Villain by definition and sometimes the God of Evil is also literally Evil. Likely candidate for As Long as There Is Evil. A theocracy to one of these is probably The Empire. May be creator of an Always Chaotic Evil race. May have a court of Demon Lords and Archdevils, or if they exist at all these may be upstarts or otherwise in opposition. Gods of evil may have The Legions of Hell at their command.

Often, there is a God of Good who stands in opposition to the God of Evil; the two are locked in an eternal Divine Conflict that dictates the Balance Between Good and Evil. The God of Good has his own agents or agent to fight against the God of Evil.

Compare and contrast Eldritch Abomination, which, as horrifying as it may be and act, are most often completely amoral and not malicious - though there can be some overlap. Compare God Is Evil, where the supreme God of the whole fictional universe (or explicitly the Judeo-Christo-Islamic One God) is a nasty piece of work. If a God of Evil exists in a setting where the Big Bad who actually drives the plot is a mortal, they'll be the Greater-Scope Villain. May overlap with or also be a Mad God. May be The Anti-God if it's powerful enough. If there is a personified representation of evil in a world with no other deities, that's case of Devil, but No God.

There are some examples in real-world pantheons, but sometimes more morally-ambiguous or outright decent gods get depicted as Gods Of Evil in Sadly Mythtaken fiction just because they are dark or associated with violence. For various reasons, this happens often enough with death gods to create a subtrope. Its worth to note that evil gods from real world religions (i.e. Angra Mainyu, Lamashtu, Marmoo, Apep) were never worshipped, in the latter's case even worshipped against. So the concept of a Religion of Evil is relatively unrealistic (not that fiction needs to be).

To avoid Flame Bait and Edit Wars, note that this trope isn't about gods who simply are evil, it's about gods of evil. Jerkass Gods that are petty, vain, or prone to Disproportionate Retribution do not qualify.