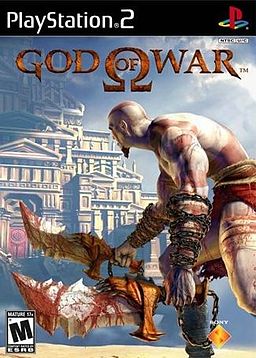 The Ghost of Sparta's in town, and Ares is about to have a very crappy day.
Advertisement:

The first game in the popular God of War series, released for the PlayStation 2 in 2005.

The player controls the protagonist Kratos, a Spartan warrior who serves the Olympian Gods. The goddess Athena tasks Kratos with killing Ares, the God of War, who is responsible for Kratos accidentally killing his family. As Ares besieges Athens out of hatred for Athena, Kratos embarks on a quest to find the one object capable of stopping the god: the legendary Pandora's Box.

Chronologically, God of War: Ghost of Sparta is a direct sequel, taking place around a year later.

God of War contains examples of the following tropes: