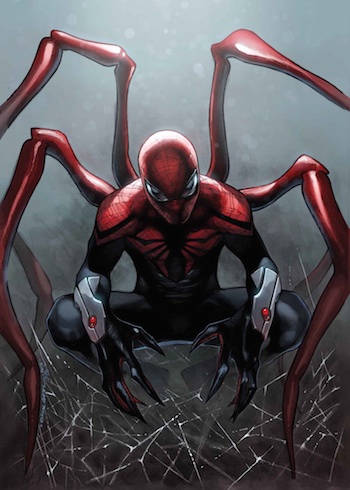 Spider-Man, Spider-Man
Now he walks like a spider can...
Sandman: So, uh, Doc, what's with the arms?
Dr. Octopus: These? Uh, well, they allow me to multitask, manipulate difficult objects, [quietly] and of course maintain a safe distance...
— The Spectacular Spider-Man
Advertisement:

Spiders are creepy. People with spider legs growing out of their body much more so. It does have a few perks, though. Characters who have an extra set of spidery appendages can often use them to scuttle about on walls and ceilings freely, jump great distances, and even reach the jar of cookies hidden on the top shelf!

These spider limbs can also be used instead of walking on human legs, giving the character an extra meter or two of height, and almost seeming to float. These limbs can be of any make. Maybe they're Artificial Limbs, Combat Tentacles with Mundane Utility, or even inky tendrils born of the deepest darkness. Though for some reason they're always attached/growing out of the small of the back.

The limbs aren't usually prehensile, and the more insectoid-looking ones are in fact often depicted with pointed tips, which isn't true to arachnid anatomy as detailed in the Real Life section. Some of the stranger variants are equipped with claws, hands, or cartoon strength static cling that allows the limbs to manipulate objects. Likewise, tentacle rather than spider based limbs can also be used as Tentacle Ropes.

Usually, this is exclusively a case of Bad Powers, Bad People due to the spider/octopus/tentacle factor. Still, there are cases of Dark Is Not Evil.

Not to be confused with Multi-Armed and Dangerous, but may overlap if the extra combat arms can also be used to scuttle around.