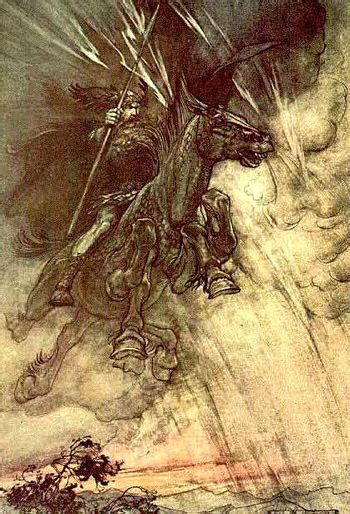 This eight-legged steed crosses eight points of the compass.
"Never trust something with an odd number of limbs."
— Catharsis
Advertisement:

In Real Life, vertebrates have at most four functional limbs — legs, arms (which anatomically are really modified forelegs), or wings (which are modified arms) — and one tail. If it has more than that, like arthropods (insects, spiders, centipedes, etc), it's not a vertebrate. Some individuals have abnormal numbers due to injury or glitches during development, but additional limbs rarely function properly. Those with less, like snakes and whales, still evolved from four-limbed animals.

There's nothing intrinsically wrong with six or more legs — it's just that current large land animals originated from a species with a four limb body plan, and adding more requires all sorts of complicated skeleton and muscle changes that are much more complex than just making the ones the organism already has a little better. Or, if they're weighing the critter down... take them out. Just look at whales for a demo. This apparently happens a lot — evidence suggests that when the first fish crawled out of the water, it did so on seven-toed feet. (For more info on the topic, try the other wiki

Of course the fact that there's one standard land vertebrate body plan doesn't stop fiction writers from subverting nature's tropes. This trope may be exactly as old as dirt, for a number of documentaries have suggested that many tales of fantastic creatures could have been inspired by early humans encountering bones of prehistoric creatures and misinterpreting the evidence. For reasons that should be obvious, in modern writing, vertebrates with five or more limbs is primarily a Speculative Fiction trope. They're often very useful in said fiction, in combat or for grabbing.

Sometimes justified because A Wizard Did It or because there's no obvious reason why aliens would always have exactly four limbs, but trying to determine the internal anatomy of such creatures may lead to Fridge Logic. While in most cases authors Hand Wave such things, it doesn't stop others from trying.

Note: as the subtropes get filled out with three or more examples, they can be TLP

'd and moved into separate subtropes.

Contrast Four-Legged Insect, which provides examples of invertebrates with fewer limbs than in real life.

Four Limbs Plus Wings (not including Winged Humanoids)

A land vertebrate is shown with either four legs or arms and legs in addition to one or more wings or the remains of wings.
Mythology
Film
Jokes
Literature
Tabletop Games
Video Games
Western Animation
Other

When Mix-and-Match Critters include parts from invertebrates, the result can be a creature that appears to be a land vertebrate, but has more than four (and often much more than four) limbs.