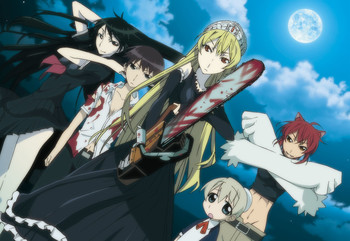 Princess Resurrection (in Japanese Kaibutsu Oujo, meaning "Monster Princess") is a supernatural manga published in Shonen Sirius by Yasunori Mitsunaga which was adapted as an anime by Madhouse. The story revolves around the adventures of a young boy named Hiro Hiyorimi who is hit by a truck at the start of the series. He is killed, but revived by the master of the maid driving the truck, a mysterious woman simply referred to as "the Princess" ("Hime"). Through her blood he becomes a nigh-immortal servant under her command, though he must periodically drink it again to preserve his new existence.

Rounding out the cast are Flandre (a diminutive android maid who can only say "fugah"), Riza (a werewolf halfbreed who originally comes in search of the Princess for revenge), Reiri (a local vampire who just likes stirring up trouble), and occasionally the Princess' sister, Sherwood.

Making appearances are the Princess and Sherwood's other siblings, locked in a deadly competition to take the family throne. Even though she has no interest in the throne she is forced to fight them regardless, along with the many monsters who have designs on her family's special blood.

This series has the blessing of Universal Pictures (the Japanese branch was a sponsor of the anime) and so can use everything from classic Universal monsters to Back to the Future. Which they have.

An OVA of Princess Resurrection was later announced

in 2010 and much to the delight of the fans, it was more faithful to the manga (both visually and tonally), had much better animation and all of the blood was retained.

The series eventually ended in February 2013 after eight years of serialization with 87 chapters and 19 volumes worth of material. In November 2017, a sequel series named Princess Resurrection Nightmare was released, appearing to feature the cast sometime after the end of the first series.

There's a Spin-Off manga called Naqua-Den that stars Nakua, the spider deity that partners with Hime.