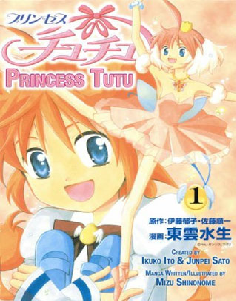 The manga adaptation of Princess Tutu is markedly different from the anime that inspired it, though the series share common plot points. It was written by Ikuko Itoh and Junichi Sato (the creator and director of the anime, respectively), and illustrated by Mizuo Shinonome. The manga was serialized in Champion Red from March to July 2003.

Rather than being a duck who turns into a girl as in the show, Ahiru Arima is a clumsy human ballet student who dreams of dancing with a prince. One day she sees a beautiful tutu in a shop, and the storekeeper, Edel, gives her a magical pendant. Wearing it, Ahiru is able to transform into Princess Tutu to restore Prince Mytho's heart pieces to him. But cold, cruel Princess Kraehe is also after the pieces, and Edel may not be as friendly as she appears...

Besides cosmetic differences, many characters were excised or altered for the manga. Pique and Lilie are replaced by Mai and Yuma, who fulfill the same basic roles. Most notably, Drosselmeyer is absent, as are many of the fairy tale motifs, though Mr. Cat remains a humanoid cat.