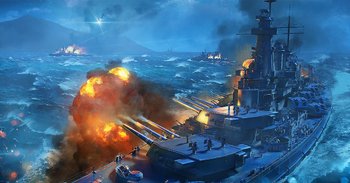 What's better than tanks slugging it out? How about a pair of warships duking it out. A tank can weigh up to about 70 tons at the most, but most warships can easily weigh 7000 tons, or more, and require many dozens of people to operate normally, let alone actually fight.

Since the introduction of the aircraft carrier, this trope has become less and less common in Real Life. See Old-School Dogfighting for the air to air equivalent, Epic Tank-on-Tank Action for the ground equivalent, and Hot Sub-on-Sub Action for the submarine version of this trope. Any tale about Wooden Ships and Iron Men will feature this almost by definition.

Not to be confuse with the other kind of Shipping, which is about characters... erm... getting some action. Also has nothing to do with Ship-to-Ship Combat, where fans get into arguments over which characters should be getting some action with which. This is about multi-thousand-ton warships slugging it out. Also note, that this is just for battles taking place at sea, on a planet. Not in Space. A Standard Starship Scuffle, on the other hand...

The last battle of the German battleship Bismarck, as depicted in Sabaton's music video.

The last battle of the German battleship Bismarck, as depicted in Sabaton's music video.