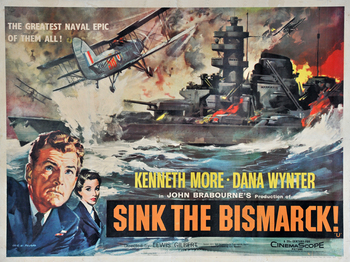 A 1960 British World War II drama directed by Lewis Gilbert, based on the novel The Last Nine Days of the Bismarck by C. S. Forester.

During the Battle of the Atlantic, Britain must fight alone as Nazi Germany sends out its most powerful battleship, the Bismarck, to hunt the supply convoys that the country needs to survive. In response to intelligence revealing the location of the battleship, the British forces organize a hunt to remove the Bismarck from the seas. In command of the operation is Captain Jonathan Shepard (Kenneth More), a by-the-book commander and disciplinarian who prosecutes the fight heedless of the feelings of his subordinates. On the opposite side is Fleet Admiral Günther Lütjens (Karel Štěpánek), commander of the Bismarck and her fleet, an embittered World War I veteran determined to ensure both his own recognition and that Germany will be on the winning side of this war.

There's a Real Life Gargle Blaster from BrewDog Brewery named after the film, a 41% quadruple IPA.

This film comtains examples of: