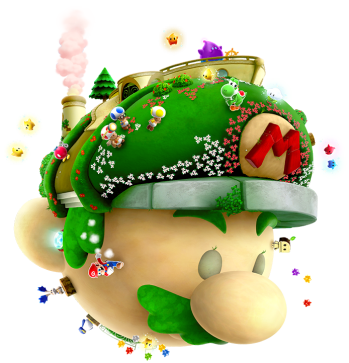 Well, at least you'll never lose it in a parking lot.
"What kind of weirdo puts his face on the bow of a ship, anyway?"
— Solid Snake, talking with Mei Ling about Meta Knight and his Battleship Halberd in Super Smash Bros. Brawl
Advertisement:

So, your airship/spaceship/boat/car or other vehicle is already cool as it is. However, it seems to be missing something. How can you make it cooler? With your own self-image, of course!

A faceship is any vehicle or ship that has the likeness of a character's face or the entire character built on it, usually its pilot or Captain. Villains have a tendency to use these, either for the purpose of intimidation or due to their huge ego, but heroes can ride in these as well (see image at right for a hero's example). If the design isn't the owner's face real face but the design of their distinctive mask or helmet, it gets a bit more plausible, but it can make it less obvious which came first.

Alternately, instead of a face, the front will be a skull, for the extra intimidation factor.

Often overlaps with Cool Spaceship, Cool Airship, Cool Boat, or Cool Car. If the face has a mouth that can swallow things, it's a Mega-Maw Maneuver. Villainous versions overlap with Malevolent Mugshot. This is a Subtrope of Thememobile.