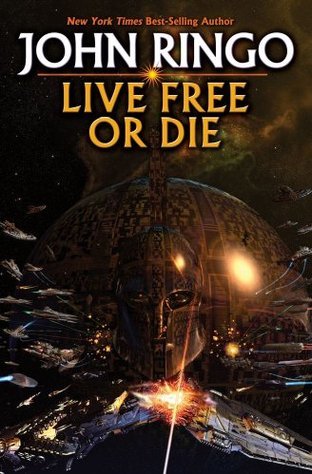 Next Sunday A.D., an alien race known as the Grtul extend their Portal Network into Earth's solar system. It is the Dawn of an Era.
Advertisement:

Two years later, NASA has just completed preliminary studies to the studies necessary to begin preliminary design phase of the bid phase on a potential ship to reach, but not enter, the "Gudrum Ring". (Cost: $976 million dollars.)

A year after that, Earth pretty much gets over half a century of space development karma all at once. A single Horvath ship comes through the gate. It destroys Mexico City, Shanghai and Cairo in a single attack. (They were warning shots - the most noticeable constructed features on the planet.) Ultimatum: Surrender all stockpiles of precious metals or they continue shooting. Have more for them to take next year or they continue shooting. The Horvath are pirates without galactic representation, but the dominant powers can no more afford to interfere than NATO could send troops to aid a third-world country no-one in the West has heard of. Earth is on its own.

Down-and-out computer tech Tyler Vernon (A somewhat thinly disguised expy for Howard Tayler) is barely making ends meet when Glatun traders discover that he once wrote TradeHard, an award-winning hard sci-fi Webcomic. A short meeting later, he has discovered one alien race finds maple syrup irresistible. After some well-executed hustling, he's richer than everyone else on Earth put together. But given that he's a plucky Southern boy, he has big dreams...

Being written by John Ringo, before you crack open the book get your popcorn ready. Troy Rising was planned as a trilogy, with the first book being Live Free or Die

. The next book, Citadel

, was released in early 2011 followed by The Hot Gate

in mid-2011. Ringo's enjoying himself, so there will be more than three books in this trilogy, with the current plan for five books total in the series... unless his Muse steps in once again.