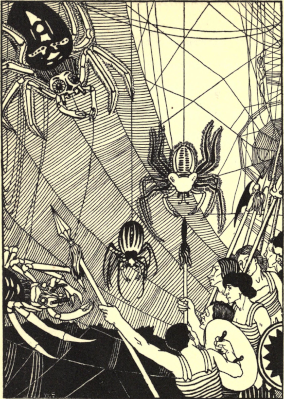 "I write of matters of which I neither saw nor suffered, nor heard by reports from people I made up. Let no man therefore in any case believe these words."
—The novel's preface, the only part that breaks Kayfabe
Advertisement:

True History, or A True Story, is a parodic adventure novel by Greek writer Lucian of Samosata.

A group of adventurers sail from Greece to the Atlantic Ocean and get shot up to the moon by a giant water spout. When they arrive, they quickly get caught up in the war between the moon and the Sun over the colonization of Venus.

This satire is not the first Science Fiction in Human history (as it was written in response to an earlier, now lost, space-travel novel) but if it is SF, it is one of the earliest examples, and the single oldest surviving one, dating to the 2nd century AD. Lucian intended the work to be a satire of contemporary sources, who describe the most ridiculous myths as being true facts, so the work is packed with things even more exaggerated and absurd while describing itself as an entirely true story.

The book can be found online here