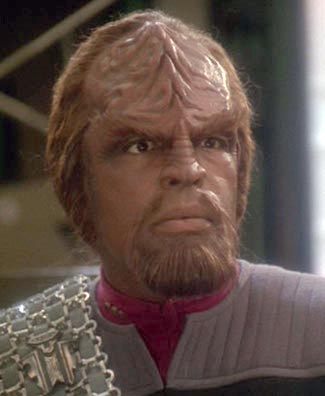 This is the forehead that defeated countless enemies and charmed numerous women, but also got smacked down a lot.
"I'd buy a big prosthetic forehead
And wear it on my real head
Everybody wants prosthetic
Foreheads on their real heads"
— They Might Be Giants, "We Want a Rock"
Advertisement:

The tendency for several sci-fi alien species to merely be one or two facial features away from humanity.

Sometimes they're not even that far away. They look totally human and sound human. In some cases, this may well be a disguise or A Form You Are Comfortable With, but in others this appears to be their natural appearance. See Human Aliens.

You'd think that alien species would be radically different — insectoids, three-legged wombats, giant cats, etc. — but animal-cruelty laws tend to discourage fitting animals with prosthetics, and the effects budget only allows for latex and makeup, so we get humans with brow ridges, humans with extra nostrils, humans with Unusual Ears, humans with bony protrusions, and so on. (Of course, the makers of Star Wars found a way around this by building and operating startlingly lifelike puppets, making Humanoid Aliens and Starfish Aliens possible.) One odd consequence of this, however, is that in the Federation Council scenes in the Star Trek movies, you often see very strange, non-humanoid (or only partly humanoid) aliens, because the movies have the necessary additional budget for them. These additional races are, of course, never seen in the TV series at all. Similarly, written and animated adaptations and entries tend to showcase a wider variety as well.

Gene Roddenberry gave more reasons for this in an interview once. Budget constraints aside, if you try to make aliens look completely alien, you'll firstly make them look ridiculous (cf. Doctor Who), and secondly make it doubly hard for the actor playing the alien to do anything mildly resembling acting. This has actually been isolated to extremely specific requirements: if an audience can't see an actor's eyes or mouth, their ability to empathize with or emotionally invest in that character is significantly impaired. If they can see neither, it's difficult to empathize with them at all. This is one reason why mooks, especially SF mooks like the Cylons or the Imperial Stormtroopers, are so often uniformed in face-obscuring helmets. While not totally undoable with the post TOS Star Trek budget, the flamboyant and outlandish alien designs of Star Wars appeal to a more pulp Space Opera aesthetic from which Star Trek has historically chosen to distance itself, at least onscreen; the expanded universe of comics and novels is a different beast. Additionally, Roddenberry had always insisted that Star Trek was about human issues and that the aliens are intended as vehicles for social commentary. This required aliens that may have been scientifically implausible (humanoid appearance, ability to communicate in English and emote like humans, etc) but easy for the human characters to interact with and the audience to relate to in the narrative. Trek fans may assume that the pure hard science fiction adventures and alien encounters occur offscreen.

The anime equivalent is the alien with Pointy Ears, colorful facial markings, chromatic skin tones (sometimes hair too, if humans are restricted to normal colors), or cutesy animal-like traits.

A scientific explanation of this trope is the theory that most advanced alien species will look roughly similar to humans due to the theory that our physical layout is the most efficient one for an oxygen-breathing carbon-based life form.

The next step past Rubber Forehead Aliens (catlike or buglike or lizardlike aliens that can still sit in chairs and hold weapons) is Humanoid Aliens, possibly overlapping with Intelligent Gerbils. Contrast with Starfish Aliens. The Uncanny Valley can result if your RF Alien looks a little too human. Possible sister trope to Bizarre Alien Limbs, if the make-up crew opts for weird rubber hands instead of facial appliances. A definite sister is Palette-Swapped Alien Food, where alien food looks like oddly-colored human food.

On a side note, Bill Blair

holds the Guinness World Record for the most Rubber Forehead Aliens (202). His first science fiction makeup role was in Alien Nation and he never stopped. For starters, not only has he played in various Star Trek franchises as Cardassians, Jem'Hadar, Klingons, Borg and Vulcans (yes, all plural), but he has appeared in nearly every Babylon 5 episode as well as both movies. His credit on the show? "Alien Actor".