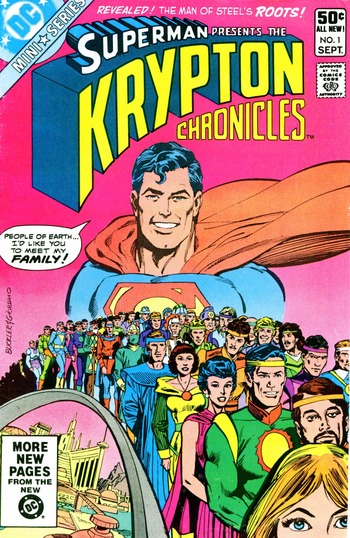 "You are going to write a series of articles for the Planet— which will be turned into a best-selling paperback— as well as a top TV mini-series! It will be the complete, authentic story of Superman's Family Tree."
— Morgan Edge
Advertisement:

The Krypton Chronicles is a 1981 three-issue limited series which explores the history of Superman's birth family, the House of El. E. Nelson Bridwell, expert at Pre-Crisis Superman's continuity and lore, wrote the story and Curt Swan and Frank Chiaramonte handled art duties.

Inspired by the success stories of Shogun and Roots, Morgan Edge gives Clark Kent a new assignment: writing a series of articles chronicling the story of Superman's family. It should be an easy job, since Clark Kent is Superman... except that Superman barely knows anything about his ancestors.

Determined to discover their family's secrets, Superman and Supergirl head towards Rokyn, a planet settled by Kryptonian survivors where they will run into old friends and old enemies as looking for answers. But they will need more than some few surviving ancient records to unveil a history which began ten millennia ago on a continent called Urrika...

Although Pre-Crisis Krypton's backstory, history, culture, language... were rendered non-canon by Crisis on Infinite Earths, parts and bits of it were slowly reintroduced in mainstream canon (the story of Hatu-El and the Vrang Revolt has been mentioned in both Post-Crisis and Rebirth continuities), and they have been referenced by non-comic media like Supergirl (2015).

See also the different World of Krypton series, which have a similar premise of exploring the world of Krypton and the lives of Superman's ancestors.

Tropes found in this story: