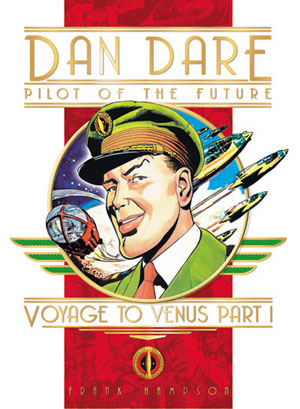 "Kingfisher's ready to go, Sir Hubert."
The first lines spoken by Dan Dare in the first issue of the Eagle.
Advertisement:

Classic British science fiction comic strip, created by Frank Hampson in the Eagle comic in 1950. Colonel Dan Dare of the Interplanet Space Fleet and his band of companions would explore other planets and defend the Earth from a variety of colourful alien threats, including arch-enemy the Mekon. The strip was known for the high quality of its artwork and its long, complex storylines, which could run for over a year of weekly two-page episodes.

The original strip ran from 1950 to 1965, with a number of format changes and a general decline in quality in the last few years. It has been revived several times, often with wildly different versions of the character: in 2000 AD (1977-1979), in the New Eagle (1982-early 1990s, featuring a descendant of the original Dan), an especially cynical miniseries in the pages of Revolver written by Grant Morrison (1990-1991), and a limited series written by Garth Ennis (2007-2008).

Oh, and Elton John wrote a song about him. Give a listen! It's cool.