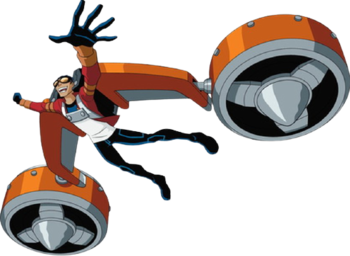 Not actually a flying toy.
Advertisement:

An alternative to the Jet Pack, basically an Awesome Backpack with helicopter blades.

There are two basic varieties:

1) The "rotor variant", which features (usually just one) helicopter rotor, usually sticking right out of the top of the pack, centered over the user's head. Tend to appear in Steampunk settings, in the hands of the Gadgeteer Genius, and in other situations where the author wants a more primitive-looking or whimsical design.

2) The "jet variant", which features (usually two) ducted fans or small jet engines, often stuck on the ends of long poles or wings. These tend to appear in more futuristic settings, or when the author wants a more realistic or military feel.

Compared to the Jet Pack, both varieties tend to be more maneuverable but slower (and there's no Toasted Buns issue).

A Sub-Trope of Flight and Awesome Backpack. See also Helicopter Hair, Heli-Critter (the biological versions of the rotor variant), and Future Copter (the vehicular version of the jet variant).