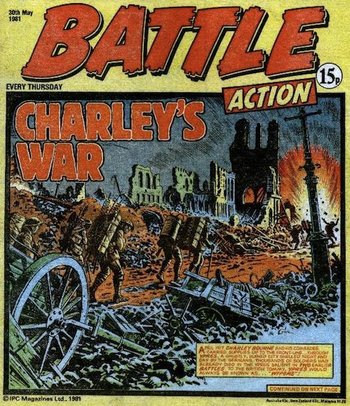 Battle (known variously as Battle Picture Weekly, Battle and Valiant, Battle Action, Battle Action Force and Battle with Storm Force and more over its lifetime) was a long-running British war comic, published weekly by IPC from 1975 to 1988. It was founded* Founded in secret, even. Sales of boys' comics were in a slump, but girls' comics were booming, so Mills and Wagner resolved to make a "boys' comic with a girls' comic ethos". Because they would face opposition by the old guard at IPC, they stayed in one weekend and created the entire pitch and initial stories in secret by John Wagner and Pat Mills as a competitor to DC Thompson's Warlord, and written by a whole host of writers that would go on to work on titles like Action and 2000 AD, including Alan Hebden, Tom Tully and Gerry Finley-Day.

Battle marked an interesting transition in British comics. Though it would never quite engender the same controversy as Action and 2000 AD, its war stories typically defied the "Boys' Own" mentality of the likes of Commando, Valiant and Warlord in favour of a more '70s and anti-authoritarian sensibility and willingness to depict the uglier, but equally true aspects of war. Like Action, many of the stories were "dead cribs" — direct rip-offs of popular or iconic films or books. They also made game attempts to do stories set in wars other than WW2, in defiance of conventional wisdom about what would sell. And they (usually) had a policy of doing the research — their aim was that if Grandad was sneakily reading it over your shoulder, he wouldn't turn away in disgust.

While initially successful, Battle suffered from declining readership and editorial changes that saw it move away from war stories and into a more general "action" genre. At the same time, sales were slipping, and by 1984, the comic was approaching cancellation and merger into the re-launched Eagle. It was saved by a marketing deal with Palitoy, the UK licensor of G.I. Joe toys, which saw the comic re-branded as Battle Action Force. The titular team's adventures gradually came to dominate the book (Occupying the valuable centre colour pages, the covers and as much as half the pagecount), but at the same time turned around its sales and kept it alive for several more years.

The death knell of Battle came in late 1986 when the Action Force rights were suddenly revoked and handed over to Marvel UK. After six weeks reverting to the Battle title, it was relaunched in January 1987 as Battle with Storm Force, the focus given over to the titular new story. Even then this wasn't enough, with Battle merging into Eagle in January 1988. Only three stories made the transition; the iconic Charley's War and Johnny Red (both of which were reprints at this point) and Storm Force.

The comic has seen a bit of a resurrection recently, as resolved rights issues have led to the more famous stories being reprinted and the likes of Garth Ennis, a longtime vocal fan (he had a letter printed in it, back in the day), helping to spread the word. In 2015, Ennis resurrected Johnny Red, and in 2018 Rebellion's Sniper Elite tie-in featured an appearance by the Rat Pack. In 2019 the Battle name was revived by 2000 AD with a new story, Operation: Overlord, set during World War II's Normandy Landings, and in 2020 a 100-page Battle of Britain Special was released, featuring stories by the original writers alongside major fans like Ennis and Dan Abnett.

Historical war stories that Battle produced include the following:

The comic itself provides examples of: